Urge ALL Republicans to Stay Unified Against Gun Control

You can’t compromise with evil.

By next week, House Speaker Nancy Pelosi will move to place you and your family on a National Gun Registry. 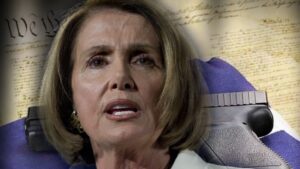 Legislation that Pelosi is pushing hard will be voted on in the House of Representatives.

But sadly, GOA has received reports from pro-gun congressmen that some Republicans are looking to “clean up” the bill and make it palatable.

Never mind the words “shall not be infringed.”

We have to tell every single Republican representative that we will not tolerate any moves to “clean up” H.R. 8 and H.R. 1446.

We want House Republicans to send Pelosi a unified message saying, “We will not support your desecration of the Second Amendment nor your attempts to limit the rights of gun owners around the country.”

So please Take Action by sending an important message to every Republican legislator in the U.S. House of Representatives. Tell them to NOT “clean up” this bill to make gun control slightly more palatable.

For years, the ATF has flaunted the law by using its annual inspection of dealers to illegitimately photograph and take information on gun owners — and the guns they own — from the Form 4473’s held by the dealers.

Of course, this is blatantly illegal. And yet, even though ATF has all this information on you — presumably in a format it can readily retrieve — there is still a significant obstacle toward consolidating this into a national gun registry.

That obstacle is:  Private transactions not conducted through dealers don’t have 4473’s.  The ATF has no way of snooping into these transactions — YET.

This is where the Pelosi-backed H.R. 8 comes in:  It would require Brady Checks through dealers — and 4473’s — on virtually every private firearms transaction in the country.

And guess what?  Now they will have a national gun registry which will tell them who you are, where you live, and what guns you own.

An accompanying bill — H.R. 1446 — would allow the newly required Brady Check to be dragged out for up to twenty days or more. And, after waiting for weeks and petitioning the FBI, even if there was NOTHING AGAINST YOU, you would NEVER be legally entitled to have your gun delivered to you. NEVER!

Again, please take just a second right now to email the entire Republican caucus. No matter who your Representative is, this is a special effort to tell EVERY REPUBLICAN in the U.S. House of Representatives that they must stay unified in opposing every bit of gun control.

If the House passes these bills with tons of Republican support, guess what message that sends to squishy Republicans in the other chamber? You guessed it. GOP Senators will be more likely to support the bill — which means we may not have enough votes to filibuster the legislation!

That’s why it’s imperative that we keep House Republicans from supporting this legislation in the House. So please Take Action right away!