Urge Your Representative to Stand with Rep. Brooks!

New Bill to Legalize the Interstate Transportation of Magazines and Ammunition 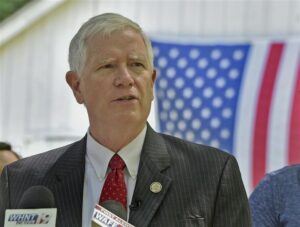 Please use the field above to ask your congressman to cosponsor this momentous legislation alongside Rep. Brooks.

Because repressive states outlawed “unlicensed guns,” Congress passed pro-gun legislation in 1986 to allow gun owners to transport firearms through these states without having to worry about being pulled over and arrested.

Currently, this provision of the Firearms Owners’ Protection Act requires:

(2) that the travel through the repressive state be temporary, and

However, it didn’t occur to the lawmakers that repressive states would begin to arrest people who traveled through those states with ammunition, but no guns.

Obviously, they underestimated the psychopathy of anti-gun crazies like New York Governor Andrew Cuomo, former Mayor Bloomberg, and so forth.

It has reached the point where someone who transits through New York while traveling from New Hampshire to Virginia—as I do—risks arrest due to state law criminalizing the possession of otherwise lawfully–owned magazines or ammunition.

Congressman Mo Brooks is about to introduce legislation to remedy that. Under the Brooks bill, ammunition and magazines would be added to the list of items protected by FOPA.

In addition, police would be prohibited from harassing transiting motorists on the basis of firearms ownership.

And even if police find some technical violation of FOPA, that nit-picking will not be enough to throw the gun owner in prison and ruin his or her life.

GOA has been looking, for some time, for a congressman who could navigate the extremely complex issues surrounding this problem. And Mo Brooks has done it.

So, we have a champion who has stuck his neck out to introduce pro-gun legislation.

And we need to recognize his efforts by reaching out to every member of Congress (see above) and by urging them to become an original cosponsor of this bill — before this legislation is officially introduced and assigned a number.

Regardless of who controls the House, it’s important to take action and to keep pushing our pro-gun agenda. You can be sure that if the tables were reversed — and if it were the GOP in control of the House — anti-gun Democrats would still be pushing their obnoxious, anti-rights agenda.

So we need to create momentum for the future pushing a pro-gun agenda now.