GOA Speaks to Tens of Thousands at Pro-gun Rally

Given that gun grabbers are using Virginia as a test case to target and take control of the legislatures in other states, gun owners nationwide must be Registered to Vote prior to the next election. Click on the red button or go here to do so. And get five pro-gun friends or family members (including adult children) to register as well. 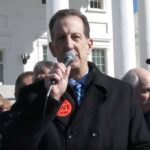 I’m sure you saw the news about this week’s rally in Virginia. The liberal media was truly expecting violence to break out.

But, of course, it was a safe, peaceful rally — because that represents who gun owners really are.

In fact, the Lobby Day rally — which is put on yearly by the Virginia Citizens Defense League — has only ever been characterized by non-violence for the past 18 years.

This year’s Lobby Day was all the more important as anti-gun Democrats (who hold the majority in Richmond) are slamming through all kinds of gun control.

I spoke at Monday’s rally to tens of thousands of gun owners. And I presented two action items that can help turn around our dire situation into a victory both in Virginia and elsewhere in the country.

You can view that speech by clicking here or on the image above.

GOA’s Director of Outreach Antonia Okafor also spoke at the rally and made quite a bit of news afterward when she mocked the liberal media’s characterization of the event as a white supremacist rally:

“This was, by far, hands down the worst white supremacist rally I’ve ever seen,” she said with a chuckle. “There were people shaking my hand. I mean, they even let me speak, for goodness’ sake. There were over 20,000 people there. So it’s almost as if MLK’s dream to see that people judge people based on the content of their character and not the color of their skin has actually become reality.”

You can view Antonia’s appearance on Fox News by clicking here or on the image below. 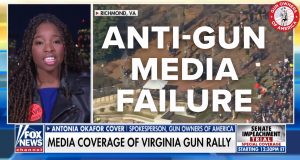 Anti-gun Democrats in the state are ignoring the strong showing by gun owners at the Lobby Day rally and have continued passing anti-gun bills.

Of course, they ignore the voice of the people at their own peril.

Anti-gun overreach has led to pro-gun victories in past

Anti-gun Democrats overreached in 1994 when they slammed two massive gun control bills into law. They lost control of the Congress as a result.

And they repeated their mistake in 2009, when Obama Democrats tried to slam through a progressive agenda that scared voters nationwide — so much so, that almost 1,000 Democrat state legislators lost their seats in ensuing elections.

Democrats went from having a 27-14 advantage over Republicans in 2008 — in terms of complete control over state legislatures — to a 14-32 deficit by the time that Obama left office.

This benefitted gun owners, as 15 states adopted Constitutional Carry laws for their states after 2009.

Believe me, I’m not saying that Republicans are always our friends. But it’s clear that we are better off when the “gun control party” does not control every lever of power.

Because when they do, they push for gun bans and gun confiscation in every place where they are in power.

I want to thank you for standing with Gun Owners of America. We are literally fighting gun control from coast to coast — from Washington state to Virginia and elsewhere.

Encourage your pro-gun family and friends to sign up for GOA’s email alerts.

And please make sure that you (and them) are registered to vote. This November is going to be crucial as we need to send the gun control party packing.