As GOA announced last week, the White House withdrew the nomination of David Chipman to be Director of the Bureau of Alcohol, Tobacco, Firearms, and Explosives!

This would not have happened without the hard work at the grassroots level of many Second Amendment supporters across America, and our Montana members and supporters were instrumental in helping make this happen!

Gun Owners of America members generated almost 1,000 calls to Senator Tester’s office telling him to hold the line and NOT vote to confirm David Chipman. In addition to the calls, the Senator’s office received an enormous number of letters imploring him to do the same.

There has never been a more dangerous choice to lead an already out-of-control government agency like the ATF.

Chipman, a registered gun control lobbyist, has a long history (while making a very high salary) of scheming about ways to turn gun owners into criminals. 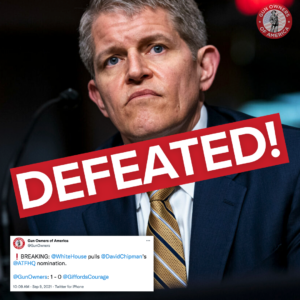 Chipman Always Has the Second Amendment in His Crosshairs

Thankfully, on September 9, the Biden Administration withdrew Chipman’s name from consideration to be the next ATF Director.

Chipman’s nomination was stopped because anti-gunners in the Senate didn’t have the votes. A handful of Democrat Senators like Montana’s John Tester wouldn’t vote to confirm Chipman because of pressure from Second Amendment supporters like you!

Gun Owners of America also wants to give a big THANK YOU to Montana Republican Senator Steve Daines who has always been a reliable Second Amendment supporter. His vote was never in question, so please call Senator Daines’ nearest district office and thank him for being a strong supporter of the Second Amendment.

David Chipman’s opposition to the Bill of Rights earned him the opposition of every Republican senator, and unanswered allegations of racism undermined his support even among Democrat senators.

Even NPR recognized the work of GOA and our grassroots activism, saying:

That dynamic played out again this time… Gun Owners of America… blasted Chipman’s nomination, calling him a threat to law-abiding gun owners.”

Sadly, the Biden Administration is relentless, and the fight is not over!

Gun owners need to TAKE ACTION to make sure that Joe Biden doesn’t give David Chipman any role in this administration.

“White House officials are trying to find another role in the administration for Chipman.”

Basically, the Biden Administration is still looking for a job for David Chipman that DOESN’T require Senate confirmation.

So, please demand that your Senators and Representatives hold Biden accountable and keep Chipman from holding ANY public office.

The Senate just admitted, by not voting on Chipman, that his disgust for the Second Amendment makes him uniquely unqualified to direct the Bureau of Alcohol, Tobacco, Firearms, and Explosives. That also means he is unqualified to hold any other public office!

The Biden Administration should cease all efforts to “find another role” for this anti-constitutional rights activist who failed to earn the support of the United States Senate.

If Senators really oppose the nomination of David Chipman to head ATF, they should also actively oppose his appointment to a non-Senate-confirmed office.

Please contact your Senators (and your Representatives) and let them know that David Chipman should not hold any public office because of his opposition to your constitutional rights.

Make no mistake, the Chipman defeat for ATF Director was a victory for the millions of gun-owning grassroots activists and GOA members who voiced their opposition to Biden’s indefensible ATF Director nominee.

GOA’s members and supporters in Montana played a huge role!

Now, please continue your valuable support by contacting your Senators and let them know you demand government appointees that respect and defend our Second Amendment.

As always, Gun Owners of America will continue to stand for the Second Amendment rights of all Americans and all Montanans.

If you have a local Second Amendment group in Montana who would like to have me come speak about GOA’s efforts to fight for your rights, please contact me here.