A few weeks ago, we alerted to you about Gun Confiscation legislation in Minnesota.

The bill was House File 9. 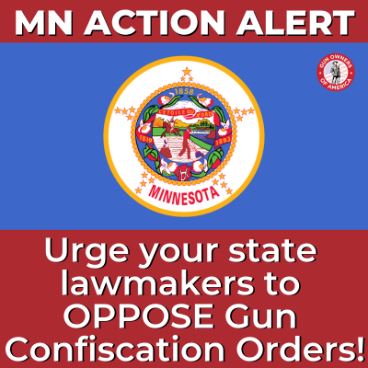 As introduced, the bill had some comical features. If Michael Bloomberg could prove he was your distant, distant relative of yours, he could make a telephone call to a pliant judge and strip you of your Second, Fourth, Fifth, and Fourteenth Amendment rights.

All he would have to allege under this poorly drafted bill is that there are “reasonable grounds” to believe you are dangerous — to someone.

After the phone call, the SWAT Team would arrive in the middle of the night to ransack your home and, if you resisted, to arrest or kill you.

In Ferndale, Maryland, a 60 year-old man was shot to death by police at 5:17 in the morning when he, not unreasonably, came to his door with his gun.

So now House File 9 has been reported out of the Democrat House committee by a vote of 10-7.

This is not necessarily bad news.  We expected Democrats to embrace this fascist bill because of their hatred for guns. And, if the party-line division holds, Republicans have a 3 vote margin in the Minnesota Senate.

This is a dangerously thin margin.  But there is a path to victory for us if Republicans hold.

Now, repressive Democrats are threatening to throw a tantrum, add gun control to the spending bill, and, presumably, shut down the government until they get their way.

Perhaps they should have learned from the recent federal experience along the same lines:  Throwing a tantrum is seldom productive.

So please contact your state lawmakers. Urge them to oppose Gun Confiscation Orders at all costs, even if that means shutting down the state government.

And while you’re at it, please contact urge your elected officials to oppose HF 8 as well, which is a dangerous Universal Background Check bill.