Gun Confiscation (The Sequel) to be Considered by the House

And her next monstrosity on the docket is H.R. 1585 — a gun confiscation bill that is “the best bill money can buy.” 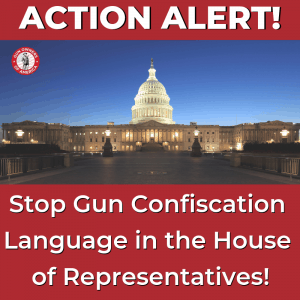 Billionaire Michael Bloomberg reached deep into his pockets in 2018 to buy himself some congressmen — politicians who would deliver the crazy wish-list of gun control contained in this bill.

Not surprisingly, Bloomberg, for his $110,000,000 in campaign graft — conveniently timed to avoid reporting laws — has gotten his belated gun control “Christmas presents” in H.R. 1585.

And the anti-gun provisions are conveniently stuck in a bill that pretends to help “battered women,” but in fact leaves them disarmed and vulnerable to their abusers.

Here are three major problems with the bill.

By now, we’ve had a lot of experience with these “quickie” proceedings.  And we know that they are frequently used by jilted lovers to exact revenge — and are also used by abusers to disarm their battered victims.

We also know that accusers frequently lie, and seldom are called to account for it.  In connection with Connecticut’s “red flag” gun confiscation program, for instance, researcher David Kopel has found that at least 32% of initial restraining orders are bogus.

Not only that, Kopel recently testified before Congress how a California man, who was cheating on his wife, used the state’s red flag law to have police confiscate his wife’s Glock.

And Salon has reported that men will use Temporary Restraining Orders to disarm their ex’s before assaulting them. So bills like H.R. 1585 can end up hurting the very people this bill is supposed to help.

2) Under section 802, a “dating partner or former dating partner” would be allowed to strip a gun owner of his or her constitutional rights based on an “ex parte order” in a “secret court” proceeding with no due process whatsoever.

All they would have to allege is that the gun owner “harassed” or “scared” them.  This is much like “gun confiscation/red flag orders — only, in some respects, even worse.

We know that in these “secret” court proceedings, where only the accuser is in the room, the judge will normally sign anything that is put before him.

In an analogous proceeding in New Mexico, a housewife obtained a restraining order against David Letterman for supposedly “sending her secret coded messages over her TV set.”

So these gun control sections of a bill which supposedly addresses “Violence against Women” are nothing but crazy anti-gun fascism, wrapped in a package of political correctness.

3) Section 101 would allow for federal funds to be used for “developing and implementing laws, policies, procedures, or training” for laws which disarm gun owners in such scenarios as defined in Sections 801 and 802.

4) Finally, Title XII would designate law enforcement resources for the express purpose of prosecuting “prohibited persons” attempting to buy a firearm from a dealer.

If this woe-begotten title were ever to pass into law, the misguided drafters who wrote it would quickly find out that most of these people are veterans with PTSD, traffic ticket scofflaws, and minor “white collar” violators who served no prison time and were under the misimpression that lack of prison meant they could still keep their firearms.

The fact is that felons do not go into guns shops in the expectation that they could pass a Brady Check.

And this is why almost no one is prosecuted for going into a gun shop, filling out a 4473, and attempting to buy a firearm — even while being barred from doing so.

So please contact your representative (above) and urge him or her to vote against the “Gun Confiscation” bill, H.R. 1585.  A copy of your letter will be sent your Senators, as well.