The city of Cleveland became a little safer last Thursday—safer for criminals.

In what has become an annual spectacle, the city dumped more than 700 firearms into the Number 1 Basic Oxygen Furnace at the Cleveland Arcelor Mittal facility.

The formerly useful weapons, collected in “gun buyback” programs in the city and surrounding communities in September, were subjected to temperatures of about 2,400 degrees Fahrenheit and 200 tons of molten iron.

Here’s a video of the actual event, but be warned, it’s difficult to watch. 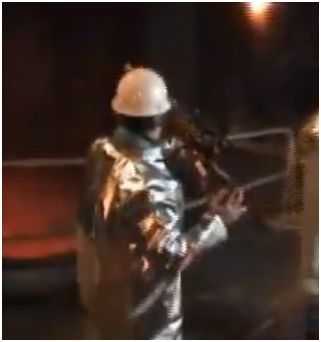 It’s not clear how the city could “buy back” something it didn’t own in the first place.

According to WTAM 1100 news, “Parma Mayor Dean DePiero says in a small but significant way, the gun buy back program is making our streets safer, and hopes it is expanded to more communities next year.”  Presumably he said this with a straight face.  But he’s wrong—dead wrong.

At best, the destruction of the firearms will have no negative impact.  It’s also possible, though, that the lack of a gun will ensure that an innocent victim does not have the means of self-protection in the face of an attack.

Sometimes well-meaning people, because they haven’t “needed” a gun in a number of years, figure they may as well get rid of it like they would any other clutter.  Elderly people, in particular, are frequently encouraged to rid their homes of unneeded firearms.

But that could prove costly.  In the same month Cleveland was hosting its “gun buyback” scheme, a 70-year old woman in Detroit used her firearm to thwart a home invasion by two men.  Thankfully, this woman had not disposed of her self-defense weapon.

A better use of the “bought back” guns would have been to give them to poor people in high crime areas who can’t afford one of their own.  “Oh, but these people would not be trained,” I can hear politicians protest.

Well, besides the fact that “training” is not a prerequisite for the exercising of a constitutional right, there would be plenty of qualified trainers willing to donate their time to such an effort.

Although not likely to be taken seriously by any big-city mayors toady, academic studies have shown that this would have a positive impact on violent crime rates.

This was most thoroughly proven by economist Dr. John Lott, who studied the crime data of every county in the country over a period of 18 years.  Dr. Lott found that more firearms in the hands of the people actually led to lower crime rates.  His study, published in the book More Guns, Less Crime, also found that crime reduction was pronounced in high-crime areas.

But instead of the guns being transformed in a useful way that actually could lower the crime rate, they were converted into washing machines, car parts and refrigerators.

Maybe Cleveland’s future victims will be encouraged to thwart an intruder by offering to make him a sandwich and wash his clothes.