It would be welcome news if President Trump is backtracking from his stated support for more gun restrictions, says the spokesman for a pro-2nd Amendment group. 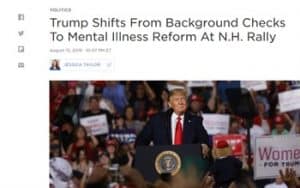 Horrific shootings in El Paso and Dayton on August 3 kicked off a new round of gun control debate: Democrats clambering to be the presidential nominee vowed to ban and even confiscate AR-15 rifles, and Republicans feeling pressure to act, or risk losing support in the suburbs, came out in support of so-called “red flag” laws.

But it appears the GOP support is waning…

The Washington Post also noticed a possible shift. “It sounds as if Trump has no intention of pusing for gun-control laws,” reads the headline of an August 19 story.

Mike Hammond, legislative counsel at Gun Owners of America, says GOA members sent a whopping two million letters to the White House and to the Senate in past weeks, urging Republicans to support the 2nd Amendment.

“I am cautiously optimistic,” he says, “that the Republican Senators and the Trump White House have seen the light.”

Keep Up the Heat on Republican Senators and President Trump!