Mass Killings with Weapons Other Than Guns

Mass Killings with Weapons Other Than Guns
(Summer 2019)

“By the time the fire was doused, 33 people had died and three dozen had been injured, shocking a nation considered one of the world’s safest. The blaze appeared to be its worst mass killing in decades, and prompted a global outpouring of grief, especially among fans of anime — a school of animation that has become synonymous with Japan.” 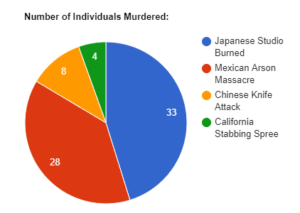 “Anger remained high Thursday as relatives began the slow, tearful task of mourning and burying the 28 people who died horrendously when gang members set a bar on fire after blocking its exits…. ‘The justice system is upside down in Mexico,’ [Miguel Angel] Ortiz said. ‘Those who carry illegal weapons go free.’”

“Eight students of a primary school in central China were killed and two others injured in a brutal knife attack carried out by an ex-convict, state-run media reported on Tuesday, in the third such assault on school children this year.”

“A man ‘full of anger’ stabbed, slashed and robbed his way across two Southern California cities in a bloody rampage that killed four people and wounded two others who were apparently targeted at random, authorities said.”

* Up to 500 murdered with machetes (Nigeria)

* 168 killed with fertilizer and a truck (Oklahoma City)

* 87 killed with matches and gasoline (Bronx)