A new threat to your gun rights from Baton Rouge

No one asked Billionaire Michael Bloomberg to bring his Leftist ideas to the Bayou State.

But that doesn’t seem to have deterred him. 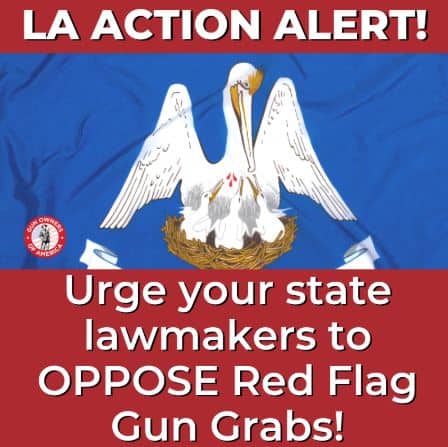 Bloomberg, a former New York City Mayor, has been actively promoting legislation like this around the country — to the tune of millions of dollars.

Under HB 483, the police can petition a pliant judge for an order to strip a gun owner of his constitutional rights AND to ransack his house and, if he resists, to arrest or shoot him — based only on an assertion that he poses a “risk.”

The first thing the gun owner finds out about this is when the SWAT Team arrives at his door in the middle of the night.

Think this is fantasy?  In Ferndale, Maryland, a 60-year-old black gentleman was shot to death by police serving a “red flag” order at 5:17 in the morning.

And, incidentally, House Bill 483 would make it absolutely clear that police are authorized to ransack the gun owner’s house ON THE FIRST MIDDLE-OF-THE-NIGHT VISIT.

There has been one definitive study on the impact of laws like this — done by criminologist John Lott.  Lott found that “red flag” gun confiscation laws:

In fact, their only statistically significant impact is to increase the incidence of rape — arguably because abusers use the laws to disarm their victims.

So, no, we are not operating under the illusion that Baton Rouge is looking to Michael Bloomberg for advice on how to abrogate the Constitution.

But, since this is Louisiana, we just wanted to make sure that this vampire piece of legislation was shot through the heart with a silver bullet, decapitated, and buried in an iron casket with garlic and a crucifix on the top.

Hearings on this legislation will be held in the House Committee on Administration of Criminal Justice on Wednesday, May 1, at 9:00am, in Committee Room 6.

Please turn out and let your opposition to this Orwellian abomination be known.

Also being considered in Baton Rouge are the following bills:

PRO-GUN: House Bill 413 would make it unlawful discrimination for a financial institution to refuse to provide services to any party because of the party’s lawful engagement in commerce in firearms and ammunition. This bill could be voted on as early as Monday.

PRO-GUN: House Bill 281 would remove the jurisdiction of political subdivisions to prohibit the possession of firearms in a wide variety of commercial establishments and public buildings.

ANTI-GUN: House Bill 101 would allow a person to strip himself of his own constitutional rights by placing his name on a gun “DO NOT SELL” list.  Aside from the obvious possibility of mistake or intimidation, this bill would create a legal minefield for FFL and private sellers in Louisiana.

Again, if you can attend the hearing on May 1, please make plans to do so.  You can view directions to the state capitol here.

And don’t forget to urge your state representative (above) to support the Second Amendment.