The Good, the Bad, and the Ugly

In the last few action alerts, I’m sure you’ve seen that I have been providing GOA members updates on the Louisiana legislature. 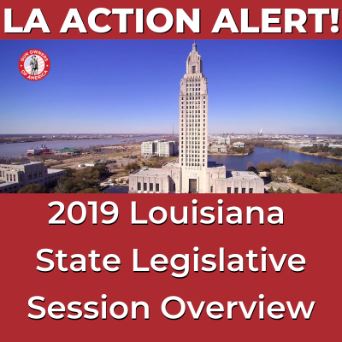 And now I am excited to be serving as GOA’s Louisiana Director in the Pelican State.

I look forward to working with GOA members to defend and expand gun rights in Louisiana. Now, back to what happened in Baton Rouge this session…

As legislators return to their districts and prepare for the upcoming elections, it is time to look back on the last session of this legislative term and review the pro-gun bills and anti-gun bills introduced.

And please note: I am including links for all the votes cited below so that you can hold your legislators accountable.

House Bill 235, by Rep. Beryl Amedee (R), would expand Louisiana’s self-defense protections to citizens exercising their right to self-defense in a place of worship.

Final Status: Failed to pass out of the Senate Judiciary B Committee.

After passing out of the House by a vote of 67 yeas to 27 nays, HB 235 was sent to the Senate Judiciary B Committee where it was deferred by its own author.

Committee chairman, Sen. Gary Smith (D), made it clear to Rep. Amedee that she did not have the votes to pass the bill out of committee. Instead of proceeding, Rep. Amedee asked to voluntarily defer the bill until next session, effectively killing the bill.

House Bill 281, by Rep. Blake Miguez (R), would prohibit political subdivisions from outlawing the possession of firearms in a wide variety of commercial establishments and public buildings.

Final Status: Failed to pass out of the Senate Judiciary B Committee.

After passing out of the House by a vote of 68 yeas to 30 nays, HB 281 was sent to the Senate Judiciary B Committee where it was killed on a motion for involuntarily deferment.

The motion was proposed by Sen. J.P. Morell (D) and passed by a vote of 3 yeas to 2 nays.  Along with Sen. Morell, Sen. Ronnie Johns (R) and Sen. Eric LaFleur (D), who as a member of the House was a co-author of Louisiana’s “Castle Doctrine” and “stand your ground” laws, voted against the bill, killing it.

House Bill 413, by Rep. Blake Miguez (R), would make it unlawful discrimination for a financial institution to refuse to provide services to any party because of the party’s lawful engagement in commerce in firearms and ammunition.

Final Status: Failed to pass out of the Senate Committee on Revenue and Fiscal Affairs.

After passing out of the House by a vote of 66 yeas to 28 nays, HB 413 was sent to the Senate Committee on Revenue and Fiscal Affairs where it was deferred by the author.

You may be asking why a bill that came out of the House Committee on Commerce was sent to the Senate Committee on Revenue and Fiscal Affairs? The answer is simple. With a makeup of 7 Democrats and 4 Republicans, the bill had no shot of making it out of committee.

Realizing he did not have the votes, Rep. Miguez opted to voluntarily defer HB 413, effectively killing it.

House Bill 101, by Rep. Jimmy Harris (D), would allow a person to strip himself of his own constitutional rights by placing his name on a gun “DO NOT SELL” list.

Final Status: Defeated in the House Committee on the Administration of Criminal Justice.

Due to the efforts of liberty loving Louisianans in voicing their opposition to this anti-gun legislation, House Bill 101 was voluntarily deferred by the author.

House Bill 483, by Rep. Gary Carter (D), was Louisiana’s own version of gun confiscation “red flag” laws that are popping up in state legislatures around the country. This is the second year in a row that Rep. Carter has filed such a bill.

Final Status: Defeated in the House Committee on the Administration of Criminal Justice.

HB 483 was actually scheduled for hearing twice, being voluntarily deferred by its author the first time, and defeated by a vote of 7 yeas to 10 nays the second time around.

WHAT TO TAKE AWAY FROM THE 2019 SESSION:

Through your efforts this session we were able to score several victories for liberty, stopping the 2019 anti-gun agenda in it tracks. But this is only half the battle.

The anti-gun Leftists at the capital and in the Governor’s Mansion will never stop their assault on our freedoms. As such, we cannot afford to be satisfied with temporarily halting the anti-gun advance. We must push back!

The good news is, with elections for the entire Louisiana State Legislature and Governor being held this year, we have the opportunity to make a big push for liberty and our Second Amendment rights in 2019!

I am counting on you for your continued time and effort to keep Louisiana moving forward!