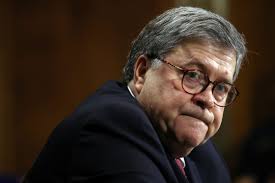 This 1996 ex post facto law was a major victory for gun control groups. It imposed a lifetime gun ban for a “crime” as minor as spanking your kid or spitting on your husband.

And one of the great, unintended consequences of the ban is that it disarmed many police officers — retroactively.

Now Barr can’t understand why the law we predicted would be ineffective has, in fact, been ineffective.

Secondly, additionally, at the request of the Justice Department, the Supreme Court turned down a petition to review whether suppressors are protected by the Second Amendment.

As a result of hearing damage suffered while I was in the Army, I have a shrill screeching in my ears 24 hours a day. That’s 3,600 seconds every hour, every day of my life. How ironic it is that people in the Trump administration consider this a small thing?

Also at the behest of the Trump administration, roughly 500,000 bump stock owners continue to be outlaws, while challenges to their ex post facto regulatory ban continue to drag on through the courts.

Lastly, House Speaker Nancy Pelosi loaded the Violence Against Women Act (VAWA) reauthorization with reams of gun control — and Republicans may sign off on it.

Under section 801 and 802, everyone you’ve ever dated could bring a secret ex parte proceeding to strip you of your guns — and of your Fourth, Fifth and 14th Amendment rights as well.

With no due process whatsoever.

Now, we are being told that some Senate Republican offices would like to negotiate with Democrats — deleting some gun control provisions but keeping others.

And all of this happens while Donald Trump, in a public love-fest with Piers Morgan, publicly muses about how he could eliminate NFA-regulated suppressors.

These, incidentally, are already registered and subject to intense government background checks.

And — oh, yes — Senate Judiciary Committee Chairman Lindsey Graham (R-S.C.) is still holding up the possibility of cutting a deal with anti-gun Sen. Richard Blumenthal (D-Conn.) to encourage the use of gun confiscation orders in all 50 states.

Which brings us to: Trump versus Biden.

Despite all the “happy talk” you hear in some media circles, the 2020 election is not going to be a cakewalk for the president.

In fact, the surest way for Trump to lose is for his supporters to assume that it is impossible for him to lose.

Look at 2018. Democrats sent tens of thousands of workers to harvest ballots in target districts and spent the better part of $5.4 billion in electing their candidates. Yes, that is billion with “b.”

And, yet, a flip of only 55,000 votes in 18 districts would have left control in the hands of the Republicans.

So what’s Trump’s strategy? That support for gun control will send students and suburban women flocking to him?

While neither of these groups are monolithic, the voters in these categories who hate Trump are not going to flip because of his support for gun control.

And, while I’m not suggesting that gun owners will vote for Joe Biden, they could stay home. Or sit on their hands.

If Trump loses the western tier of counties in Pennsylvania, plus Macomb County, Michigan and Florida’s “Redneck Riviera,” then he probably loses the presidency.

And for what? Does Trump think Broward County, Florida is going to flip?

Donald Trump promised us he would be the best pro-Second Amendment president in history. Thus far, that’s not been the case.

Having said that, there’s still time to turn things around. Donald Trump could get all of his base behind him by fixing his positions on bump stocks and suppressors and probably win big.

But betting against the Second Amendment has never been a winning strategy — for Democrats or Republicans.