Urge Joni Ernst to not give in to anti-gunners

Please send a personalized message to Sen. Ernst urging her not to give in to the gun controllers.

Urge Ernst NOT to Cave on the Second Amendment

As you probably know, Nancy Pelosi and her anti-gun House Democrats took the Violence Against Women program (VAWA), loaded it down with extremist anti-gun provisions — and effectively “dared” Republicans to vote against something that claimed to curb domestic violence. 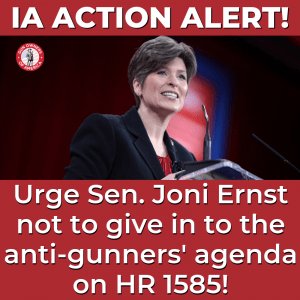 Of course, we all know that abused women can be victimized by Gun Confiscation/red flag programs such as the ones Pelosi stuck into VAWA.

This is because abusers can use anti-gun orders to disarm their targets — and leave them defenseless against the abusers.

Perhaps for this reason, criminologist John Lott, in the definitive study of Gun Confiscation/red flag laws, found that jurisdictions which adopted them had increased levels of rape.

Well, H.R. 1585 has now passed the House by a partisan vote, more or less.  And, although it has been declared “dead on arrival” in the Republican Senate, news reports are indicating that anti-gunner Dianne Feinstein is hoping she can persuade Iowa Senator Joni Ernst to negotiate a “Senate version” which only rips away part of the Second Amendment.

Ernst will, hopefully, not be enticed into making such a “deal with the devil.”

Aside from its wide range of other constitutional concerns, the bill is the most anti-gun legislation thus far passed by Pelosi’s House.

Section 801 would allow a gun owner to be stripped of his or her constitutional rights by any “dating partner or former dating partner.”

By now, we’ve had a lot of experience with these “quickie” proceedings.  And we know that they are frequently used by jilted lovers to exact revenge.

And we also know that accusers frequently lie, and are seldom called to account for it.

In connection with Connecticut’s “red flag” gun confiscation program, for instance, researcher David Kopel has found that at least a third of all initial restraining orders are bogus.

Section 802 would allow a gun owner to be stripped of his or her constitutional rights based on an “ex parte” order issued in a “secret court proceeding” with no due process whatsoever — accusing him or her of “harassing” or scaring the accuser.

In the case of ex parte orders such as this, when only the accuser is in the room, we know that a judge will sign almost anything put before him.  In New Mexico, a housewife obtained a restraining order against David Letterman for supposedly sending her coded messages over her TV set.

The secret nature of the ex parte proceedings is the worst part of all this.  But for many reasons, it is a myth to assume this legislation can be cleaned up through some slight “tweaking.”

Even if a red flag bill was stripped of the ex parte “secret court procedures,” the legislation would still deprive an individual of his constitutional rights — despite the fact that he has committed NO CRIME, and will probably NEVER commit a crime.

Like the Tom Cruise movie, Minority Report, the gun owner is being singled out to lose his constitutional rights by the “thought police,” based on a low level of proof — and a subjective standard which is nowhere defined.

Then there’s Title XII in the bill.  This provision would designate law enforcement resources for the explicit purpose of prosecuting “prohibited persons” attempting to purchase a firearm from a dealer.

If this woe-begotten title were ever to pass into law, the misguided drafters who wrote it would soon find that most of these people are veterans with PTSD, traffic ticket scofflaws, and minor “white collar” violators who served no time and were under the misimpression that the lack of prison meant they could still keep their guns.

It is a fraudulent solution, based on a fraudulent assessment of the nature of the problem.  The fact is that dangerous felons do not go into gun shops expecting that they will pass Brady Checks.  And this is why fewer than 50 people a year are regularly prosecuted for attempting to purchase firearms while being prohibited from doing so.

In short, Ernst is being invited to take an anti-gun piece of garbage — and somehow spray enough perfume on it so it will supposedly be presentable.  This is a fool’s errand.

The much better route for the Senate would be to simply pass a reauthorization of current VAWA programs — and invite the House to “take it or leave it.”

In short, you can’t put makeup on a pig — and, no, we’re not referring to Pelosi.  And you can’t make this unconstitutional bill acceptable by tweaks.

So please urge Sen. Joni Ernst to oppose VAWA and not cave into working with the anti-gunners.

GOA will score the vote as a “gun vote.”

Cue The Fireworks: 18 To 20-Year-Olds In This State Can Carry Concealed (And Without A Permit!)