How anti-gun states can already confiscate guns without trial

Nobody wants clearly dangerous people to have guns, but new confiscation laws in anti-gun states are dangerous for gun owners, law enforcement, and the Bill of Rights.

On Tuesday, the Senate Judiciary Committee held a hearing titled “Red Flag Laws: Examining Guidelines for State Action.” Red flag laws, also called Extreme Risk Protection Orders or ERPOs, seek to identify dangerous people before they commit violent crimes and remove their access to firearms. Reports can be filed about a potentially dangerous person, whose Second Amendment right to own a gun can then be removed with very little process. 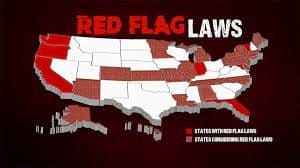 As of last month, 14 states have laws on the books empowering judges to issue red flag orders. While some have existed for a while, these laws became more popular at the state level following the 2018 Parkland shooting in Broward County, Florida, partly because of the clear warning signs that the murderer gave leading up to the attack and the tips that were fumbled by federal law enforcement.

Nobody wants people who are clearly dangerous to themselves and the public to have firearms. That’s why a lot of people own firearms themselves. So the impetus to take guns away from would-be mass shooters is at least an understandable one…

Another big due process problem with some of these statutes is that confiscation orders can be issued ex parteunder some state laws, which means that they can be issued when a judge only hears one side of the story and the target of the petition is not permitted to defend himself.

Michael Hammond, legislative counsel for Gun Owners of America, describes these laws as allowing “police to convene a Kafkaesque secret proceeding, in which an American can be stripped of his or her gun rights and Fourth Amendment rights, even though gun owners are barred from participating in the hearings or arguing their side of the dispute.”

People affected by confiscation orders can typically petition to get their guns back after the fact, but even if they’re successful in doing so, they were still deprived of a constitutional right without even being able to confront their accusers. And when some states allow ex-dating partners to bring petitions without any sort of investigation and without giving people a chance to defend themselves, that’s just an outright mockery of the Fifth Amendment.

“If the Constitution can be suspended in a secret hearing, where does this lead?” Hammond writes. “What if this newspaper could be shut down for 21 days without due process — based on a secret complaint?”…