An “assault weapons” ban that was rejected by state lawmakers earlier this week was the result of a wide-reaching and comprehensive grassroots strategy in Virginia executed by a handful of Second Amendment advocates and organizations, according to gun rights groups. 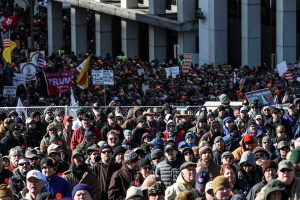 Executives at four gun rights groups told The Epoch Times that a barrage of social media alerts, phone calls, and emails to lawmakers, office visits, petitions, public awareness campaigns, and testimonies at hearings they helped organize with members were all contributing factors to the legislation losing support in a Senate Judiciary Committee hearing on Feb. 17.

“The war on gun owners by the Democrat leadership triggered a strong grassroots response that spread across the state like a tsunami,” Philip Van Cleave, president of the Virginia Citizens Defense League (VCDL), told The Epoch Times.

The assault weapons ban (House Bill 961) was shelved to next year’s session after four Democratic senators—Creigh Deeds, John Edwards, Chap Petersen, and Scott Surovell—broke with their party and joined Republicans to reject the bill in a 10–5 vote. Lawmakers also asked the state crime commission to study the issue…

Other gun rights organizations detailed how they regularly informed their members of when and where to appear for in-person lobbying efforts. Some also issued alerts to businesses, telling them how the gun control bills would negatively impact stores and increase restrictions on Virginian’s hunting, sport shooting, and self-defense needs.

John Crump, Virginia state director at Gun Owners of America (GOA), said they used an “alert system” to deliver information to gun owners and used social media to spread their message further. They also helped members connect with lawmakers via phone and email.

“The grassroots efforts in Virginia to defeat the bill were nothing short of amazing,” Crump told The Epoch Times. “From the county meetings to the thousands of people taking to the streets of Richmond, these gun owners stood up to a tyrannical bill.”

Crump said the most important thing they can do as gun owners is to interact with their representatives. They’re far from being done, he said, adding that there are a number of other gun control proposals still being debated in the state legislature. GOA has more than 2 million members.