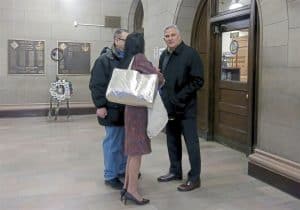 The decision issued by the Commonwealth Court in Firearms Owners Against Crime v. City of Harrisburg said the activists have standing to challenge four Harrisburg gun control laws, overturning a precedent that someone must break the law to challenge it.

In an opinion, Judge P. Kevin Brobson wrote that the precedent is “untenable and must be overruled because it affords greater access to the courts to challenge the facial constitutionality of ordinances to scofflaws than to law-abiding citizens.”

In an emailed news release, the Virginia-based Gun Owners of America called the decision “BIG NEWS” for four plaintiffs in Pittsburgh who are suing Allegheny County District Attorney Stephen A. Zappala Jr. for refusing to accept private criminal complaints filed against Pittsburgh Mayor Bill Peduto and Pittsburgh City Council members on the grounds that the plaintiffs did not have standing. The group has provided funding for the case against Mr. Zappala.

Read More at The Pittsburgh Post-Gazette

The Battle is Raging on Capitol Hill