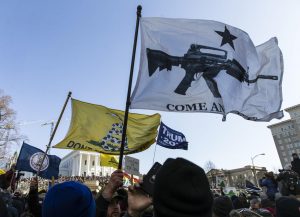 Gun right supporters wave flags during a pro-gun rally near the State Capitol in Richmond on Jan. 20. DANIEL SANGJIB MIN/RTD

The gun rights group behind January’s large protest in and around Capitol Square is suing to block the implementation of a gun control measure set to take effect next month.

The Virginia Citizens Defense League is among the five plaintiffs suing the state over a soon-to-become law that limits people to buying one handgun per month. The group filed the lawsuit Friday in Goochland Circuit Court, arguing that the law violates residents’ constitutional rights.

It adds: “It would be unfathomable if the General Assembly attempted to place limits on how many times per week a newspaper could be published, how many abortions a woman could receive in a decade, or how many times a court-appointed criminal defense lawyer could be appointed for an indigent defendant facing jailable offenses during a lifetime, to name but a few illustrative examples of this problem.”

Virginia had a one-handgun-a-month law from 1993 until 2012, when then-Gov. Bob McDonnell signed a repeal measure. Proponents say the legislation will help limit the number of guns that end up on the black market and are used in crimes in other cities…