House Republicans are poised to vote against eight bills aimed at preventing gun violence this week, in part due to opposition from powerful pro-gun groups on the right…. 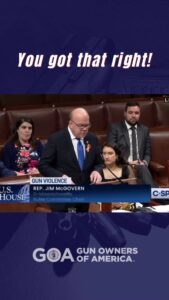 Click on the picture to see video of House Democrat Jim McGovern disparaging GOA, NRA and the House GOP.

In a “whip notice” sent to rank-and-file members on Tuesday afternoon, House GOP leadership urged a “no” vote on all eight bills, referring to the seven-bill package as the “Unconstitutional Gun Restrictions Act.” They wrote that House Democrats had “thrown together this reactionary package comprised of legislation that egregiously violates law-abiding citizens’ 2nd Amendment rights and hinders Americans’ ability to defend and protect themselves and their families.”

Screenshot of the end of the June 7th whip notice, including links to talking points from the NRA and Heritage Action for America. House Republican Whip Steve Scalise

It’s not uncommon for party leaders to note the opposition of outside groups to major pieces of legislation. For example, in a February whip notice urging Republicans to vote against a major piece of legislation aimed at boosting the US semiconductor industry, GOP leaders noted the opposition of the Federation for American Immigration Reform, National Taxpayers Union, and Americans for Prosperity.

AR: Asa Hutchinson Wants to Have a “Conversation” on Gun Control