Gun Owners of America Back Dan Forest as “Clear Choice”

Written by By the Wire Published: 08 September 2020

In Wake County it can take months to receive a pistol purchase permit. One contributing factor to that long wait (that illegally long wait with multiple arbitrary factors) is that there are a TON of people applying for said permits. 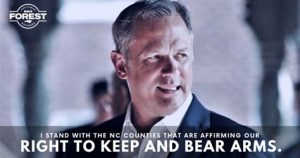 They see the news; the riots, the lockdowns, the ease with which local governments can simultaneously violate the rights of free men and women while also failing to protect those residents and their property from violent Mobs. The result for many has been a clear motivation for owning a firearm.

Well, in such an environment, there is only one clear choice for governor according to gun-rights group Gun Owners of America:

Tim Macy, Chairman of GOA, said, “When considering the two top candidates for North Carolina’s top elected office, the choice could not be clearer. Governor Roy Cooper has shown time after time he’s willing to throw the Bill of Rights in the trash.”

“But Dan Forest stands in stark contrast on your right to keep and bear arms. Dan has a documented record of standing for your rights. In fact, he’s stood with gun owners when they passed Second Amendment Sanctuaries across the state,” Tim Macy continued. “Additionally, Dan has assured gun owners that he supports Constitutional Carry and will stand as a firewall against red flag gun confiscation and other gun controls.”