GOA is proud to support Dan Forest for Governor of North Carolina. 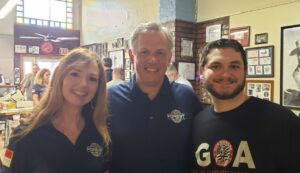 When considering the two top candidates for North Carolina’s top elected office, the choice could not be clearer. Governor Roy Cooper has shown time after time he’s willing to throw the Bill of Rights in the trash.

But Dan Forest stands in stark contrast on your right to keep and bear arms.

Dan has a documented record of supporting your rights. In fact, he’s stood with gun owners when they passed Second Amendment Sanctuaries across the state.

Dan has assured gun owners that he supports Constitutional Carry and will stand as a firewall against red flag gun confiscation and other gun controls.

So it’s vitally important that Tar Heel gun owners, sportsmen and self-defenders do everything possible to support Forest. Please get involved by volunteering and donating to his campaign.

But most importantly, please vote for Dan. Absentee ballots are available, early voting is from October 15th-31st, and election day is November 3rd!

Gun Owners of America Back Dan Forest as “Clear Choice”