At a campaign stop in New Hampshire, Harris said she plans to take executive action if Congress doesn’t pass gun control and enact an “assault weapons” ban within her first 100 days in office…. 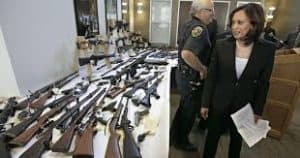 Erich Pratt, Executive Director for Gun Owners of America, pointed out to AmmoLand that Harris ignores all the defensive uses of AR-15 and AK-47 across the country. He and others view these rifles as a tool that help even the odds against criminal attackers.

“Senator Kamala Harris is not fit to be president if she thinks it’s okay to shred an important pillar in our Bill of Rights. The Second Amendment states that the right to keep and bear arms ‘shall not be infringed.’ But Harris ignores the very clear wording of our Constitution,” Pratt said. “Moreover, the very AR-15 style firearms that she wants to ban have been extremely useful when used by Americans facing multiple attackers. Just last month, a Houston man used his AK-47 to protect his home and his life against five home invaders. If Harris were to get her way, that law-abiding gun owner would have been severely handicapped in his ability to defend himself.”…

Harris has stated these proposals are just the tip of the iceberg for her gun control platform. In the coming weeks, she will release more information about her plans on Firearms.