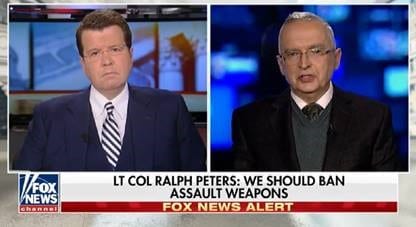 Gun Owners of America challenged Col. Ralph Peters (ret.) to a debate on the subject of gun control.

Col. Peters wrote an article for the anti-gun New York Post last week — and then appeared on Fox News — where he spewed no fewer than ten outrageous lies or contradictions about the Second Amendment.

“It’s a good thing Col. Peters is no longer running our military,” said GOA Executive Director Erich Pratt. “His understanding of firearms and the Constitution is woefully ill-informed.

“For starters, Col. Peters refers to firearms like the AR-15 as ‘assault weapons,’ a term that the New York Times  admitted was a term made up by Democrats in the early 1990’s to demonize a whole class of firearms,” Pratt said.

“Perhaps this Army Colonel sat behind a desk and didn’t get much range time,” Pratt said, “but real ‘assault rifles’ have a selector switch so the gun can fire in automatic mode. None of the guns Peters is trying to ban can fire as a machinegun.”

Perhaps unknowingly, Col. Peters also joined Joe Biden in telling women that they should buy a shotgun, rather than an AR-15. “That’s the type of pompous arrogance that drives people crazy,” Pratt said. “It’s the thinking that says, “I know better than you what’s good for you.’”

Col. Peters states in his article that the Florida shooter and recent killers could not have killed as many people as they did, where it not for the weapons they used. “But I guess Col. Peters has forgotten about the recent truck attack in France which killed 86 people or the use of box cutters on 9-1-1 to kill more than 3,000 people. And perhaps he is unaware that knives were used to massacre 50 people in a Chinese coal mine. Killers will use whatever they can get their hands on,” Pratt said.

“Col. Peters also naively said that firearms like the AR-15 are the criminals’ weapon of choice. But a quick look at FBI statistics shows that knives, hammers or hands kill far more often than rifles of all types — of which the AR-15 is just a subset. And when it comes to guns, handguns are truly the criminals weapon of choice, as they’re used 25 times more often as rifles.”

Perhaps Col. Peters’ most egregious misstatement was his assertion that the U.S. should ban any semi-automatic that can be easily converted to a fully automatic firearm.

“Does he realize what he’s advocating?” Pratt asked. “That means he would ban virtually every single semi-automatic handgun and rifle known to man!”

Pratt called on Fox News to bring on a GOA spokesman to correct Col. Peter’s misstatements.