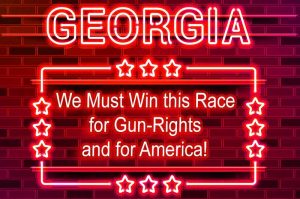 The Georgia run-off elections for the two open US Senate seats are of utmost importance to preserving the Second Amendment and to maintain a firewall against a potential Biden Presidency and the communist agenda trying to overtake America. To help gun-owners understand the significance of the races, AmmoLand News is releasing an election guide breaking down the who, what, when, and why.

On November 2nd, 2020, both of Georgia’s US Senate two (2) seats were up for election grabs. According to Georgia’s election laws, a candidate would need to capture more than 50% of the vote totals to win a Senate seat. Both Georgia races turned out a crowded field of challengers, and no one in either race broke the 50% threshold. The failure triggered two (2) run-off elections where the top two candidates will face off against each other in each race. The run-off election will take place on January 5th, 2021.

Pro-America Groups in the fight.

Georgia Carry: Georgia Carry is dedicated to advancing gun rights in the state. They are actively encouraging their members to vote and educating the general public on the candidates’ stances on gun rights.

Gun Owners of America: GOA has mobilized to help win the battle in Georgia. They have temporarily moved staff to assist in a get out the vote effort. GOA members will be door knocking, making phone calls, and texting to mobilize gun owners to vote in the state.

National Rifle Association: The NRA has started a media blitz to get the word out about the importance of the Georgia elections. They have used their reach to direct their members to help out both Loeffler and Perdue.

Brady: Brady has activists on the ground door knocking as well as making phone calls and texting. They have used their reach for fundraising for anti-gun efforts to flip the Senate. What are you doing to counter them?

Everytown for Gun Safety: Everytown has used its massive war chest to fund the efforts of Warnock and Ossoff. They have set up call centers to make phone calls on behalf of both anti-gun candidates. Have you donated to the pro-gun candidates?

Moms Demand Action: MDA is another Bloomberg funded anti-gun groups raising money for the Democrat candidates. MDA is door knocking to try to take the Senate to enable anti-gun legislation to be rammed through to the President’s desk. Have you volunteered time to help the Republican team win for America?

Gunowners are not backed by a billionaire but can use our real grassroots efforts and teamwork to compete and win in Georgia.