Save the Senate…Save the Country

Stakes Have Never Been Higher

GOA Launching “Get out the Vote” Efforts in Georgia

It is no exaggeration that the two Georgia Senate special elections on January 5th will determine the future of the Second Amendment. 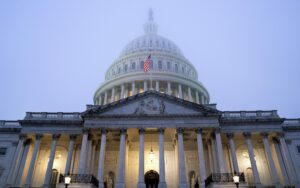 If both Democrats win, anti-gun Democrats will control the Senate, the House, and the Presidency (if the electors anoint Joe Biden in December).  The Second Amendment will be effectively dead, as will our system of limited government.

On guns, Democrats have promised to pursue a massive ban of most of the most popular guns in America.  As a senator, Biden engineered the semi-auto ban, and we can expect a ban on many commonly-owned rifles and handguns.

Americans will be “allowed” to keep the guns they have only if they are registered with the federal government and pay a tax stamp.  As in California, this registration list will be used as a handy guide when the government takes the next step and comes around to confiscate the guns in civilian hands.

Joe Biden’s publicly available platform gives the specifics for the Democrat’s gun control agenda. So we can expect them to push a ban on all handguns which do not incorporate “smart gun” technology.  Because this technology is not yet reliable, this may amount to an effective ban on handguns.

Anti-gun Democrats will push Universal Background Checks, which means that every gun purchase in the country will end up being registered.  Red flag gun confiscation laws will allow for middle-of-the-night raids on law-abiding gun owners, where guns can be confiscated without due process or trial by jury. As we have already seen in states that have red flag laws, police can confiscate guns based merely on false or spurious accusations from a disgruntled family member or neighbor.

Again, all of this is explicitly contained in Biden’s agenda.  And it will be implemented by Beto “Hell yes, we’re going to take your AR-15, your AK-47” O’Rourke.

This is why it is vital that we support the pro-gun candidates — Kelly Loeffler and David Perdue — in the Georgia run-off election and prevent the anti-gun Left from taking the majority.

Gun Owners of America will be on the ground in Georgia, getting gun owners out to vote, and we could really use your help!

We need people to come to Georgia to help knock on doors. But even if you can’t go to the Peach State in the next month, there are other ways you can help:

Finally, if your friends and family in Georgia are still not registered to vote, they have until December 7th to register! They can request an absentee ballot beginning November 18th, and Early Voting begins December 14th. And don’t forget about election day on January 5th!

GA: Save the Senate…Save the Country