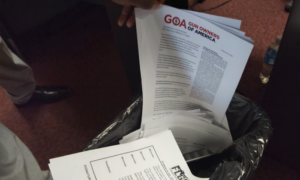 Petitions gathered by members of gun rights organizations were thrown into a trashcan By Florida State Rep. Chuck Brannan’s legislative aide soon after being delivered to the office. (Courtesy of Luis Valdes)

On Tuesday, Feb. 22, members from Gun Owners of America (GOA), the Republican Liberty Caucus (RLC), Capitol City Young Republicans (CCYR), the Republican Hispanic Assembly of Florida (RHAFL), and Florida Gun Rights (FLGR) held an impromptu rally at the Capitol Building in Tallahassee, Florida, in support of House Bill 103, the constitutional carry bill currently stalled in the Florida House. During the rally, they collected over 100 petitions asking state Rep. Chuck Brannan to bring the bill to the floor for a vote. When the rally concluded, some of the rally attendees went to Brannan’s office to personally deliver the petitions, never expecting that the results of their day-long effort would wind up in the trashcan within 30 minutes.

“We met at the State Capitol to voice our issues with legislators on not advancing Second Amendment rights,” Valdes recalled. “At the end of this event, GOA and FLGR had collected petitions. One of the petitions was directed to Rep. Chuck Brannan, who is the committee chair of the House Criminal Justice and Public Safety Subcommittee, and that is currently where House Bill 103, the constitutional carry bill, resides. We went to his office to drop off the petitions and his legislative aide told us he had a meeting with another group and asked us what we were doing, and we stated we had petitions regarding constitutional carry that we would like to have presented to Rep. Brannan and asked if he could take them. He said ‘yes, just put them on my desk.’ Then we went to go visit other lawmakers. About 20–30 minutes later, when we finished meeting with the other lawmakers, we returned to Rep. Brannan’s office.”

When they returned, the legislative aide wasn’t there. However, someone saw that the petitions they had stacked on the desk were in the trashcan underneath it. It was then Valdes said the legislative aide “rounded the corner.” What happened from there was recorded on video by a member of FLGR.

“We asked him why they were in the trash,” Valdes continued, “and he made multiple statements, saying; he put them in there, he reviews them with Brannan, it was a mistake, he meant to put something else in the trash. He was befuddled and confused. The color literally drained from his face. He was caught and he was on the verge of tears. At no point were we aggressive. We simply asked why they were in the trash. As concerned citizens we find this offensive.”…