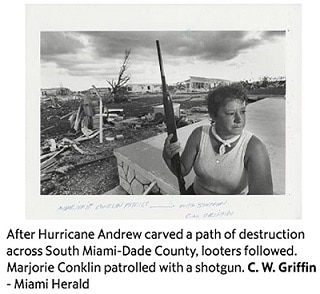 In 2005, at the time of Hurricane Katrina, the New Orleans police used the excuse of enforcing compliance with the mandatory evacuation order to confiscate firearms. They went door-to-door seizing guns from the people who stayed behind hoping to ride out the storm. These were the same firearms that the citizens expected to have available to protect their lives and property in the aftermath of the disaster.

In fact history has repeatedly shown that firearms, including assault weapons, can be very useful and life-saving tools following natural disasters, such as Hurricane Hugo in 1989 and Hurricane Andrew in 1992 (photo, left), and during times of civil unrest, as during the Rodney King L.A. riots of 1992.

In New Orleans in the aftermath of Hurricane Katrina, Mayor Ray Nagin’s police chief superintendent said that the only guns allowed would be “in the hands of law enforcement.” Moreover, Stacy Washington, a decorated Air Force veteran, writing for the NRA Americas’ 1st Freedom, pointed out: “Guns were confiscated with disastrous results: Utter lawlessness ensued, and the police were spread too thin to respond to all the mayhem. Before total gun removal was completed, the NRA stepped in, first gaining a preliminary injunction and then an order putting a stop to the ill-conceived plan. The sheriff had to return more than 1,000 firearms to their respective owners.”