EpochTV: The Meaning of Shall Not Be Infringed

For years now there has been an upward trend in women becoming first-time gun owners, a trend that has only increased in the wake of the COVID-19 pandemic. With eight million new gun owners nationwide, it’s especially fitting that “Crossroads” host Joshua Philipp interviewed Antonia Okafor, the director of outreach for Gun Owners of America, for his show titled “Anti-Gun Narratives Driven by ‘Intentional Misinformation’ and Political Interests.” Okafor, a native Texan, is the founder of Empowered 2A, a nonprofit organization with a mission of teaching women to advocate for gun ownership. Empowered 2A has now been rolled into Gun Owners of America (GOA) as the “woman’s arm,” and along with it Okafor has been added as a member of the organization, much to their credit. She has recently been moved to the position of director of outreach for the GOA and, after listening to the interview, it’s obvious why they picked her to fill the position. 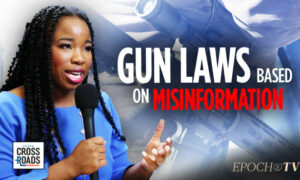 While many may think of the NRA (National Rifle Association) as the first line of defense against anti-gun legislation, Okafor states early on that GOA is a much more hardline organization when it comes to protecting the Second Amendment. They see the Second Amendment as it was originally intended, cutting away the home defense and hunting narratives that are commonly used to argue the public’s right to keep and bear arms (and that are often twisted by media pundits into the counterargument that no one needs 100 rounds to shoot a deer). GOA argues instead that the citizens’ rights to firearms are for the purpose of overthrowing a tyrannical government if necessary, though Okafor certainly doesn’t advocate for any kind of revolt. What she is advocating for is protecting ordinary Americans’ ability to defend themselves against any threat, as the Founding Fathers intended.

To do this, GOA is working hard to change and repeal gun control laws at the state and local levels in anticipation of having to push back at an increasingly overreaching federal government. According to Okafor, one of their main goals is to pass laws allowing for Constitutional Carry, which has just passed in Texas. Okafor explains that Constitutional Carry is the right to carry a gun without a permit, something that is now legal in nearly half the country. The media and authoritarian left will always try to spin this as returning us to the days of the Wild West where anyone could have a gun without having to prove they aren’t a hardened criminal, but what Okafor describes isn’t that at all. Rather, what GOA is advocating is the right for law-abiding citizens to own firearms and carry them wherever they please without having to jump through additional legal hoops to obtain a permit, such as logging in a certain number of hours at a firing range or sitting through a lengthy and expensive gun safety course before they’re allowed to carry a firearm. They aren’t advocating that new gun owners don’t get training, just that it shouldn’t be required by law.

Surprisingly, Okafor reveals that Texas is the 21st state to pass Constitutional Carry laws, illustrating that even supposed bastions of freedom aren’t necessarily all that free in our current climate. Texas already has castle doctrine laws, and previously residents needed to have either an open carry or concealed carry permit if they didn’t want to leave their firearms at home or in their vehicle. Okafor does state that Texas only has legislative sessions every other year, which is part of the reason it wasn’t the first state on the Constitutional Carry bandwagon. However, it’s long had Campus Carry laws allowing students to conceal carry at colleges and universities, so it’s shocking that it took them so long to rescind the need for permits.

Okafor and Philipp discuss some of the federal government overreach that is working so hard to take away states’ rights any way they can in the realm of gun control. Philipp brings up Congress’ attempts to pass legislation aimed at holding gun manufacturers accountable for gun deaths by allowing them to be sued, something that Okafor immediately pinpoints as a slippery slope to opening other industries to lawsuits as well. Any number of industries could fall victim to follow-up legislation using this kind of law as precedent, regardless of what their product was intended to do. It isn’t difficult to imagine the scenarios Okafor hints at with her analysis of these laws such as car manufacturers and alcohol distilleries getting sued for the damage done by drunk drivers; knife manufacturers sued for stabbings; or rope manufacturers sued for suicides by hanging. We’re a litigation-happy country already, and opening up businesses to liability for death and injury caused by their product being used in a way it was never intended—like shooting up a school—is a nightmare in the making.

Other federal policies GOA is pushing back against are the seemingly “harmless, common sense” policies sold to the uneducated masses, like banning high-capacity magazines or bump stocks. Okafor again outlines the foolishness of these policies, and how they not only don’t do what they’re intended to do, but are almost universally implemented by people who know nothing about guns. High capacity bans targeting magazines holding more than 10 rounds of ammunition are ludicrous to anyone who knows anything about firearms (handguns in particular) and just how easy it is to miss a moving target, like an attacker, under stress. Okafor discusses this among the other ways the general population is intentionally misinformed about guns and gun safety, such as the fact that there are still huge numbers of Americans who genuinely believe that the “AR” in “AR-15” stands for “assault rifle.” This myth persists even though there’s no such thing as an “assault rifle” and the “AR” is an abbreviation for the manufacturer—Armalite. Anyone that has tried to argue these points with a friend or family member who is completely ignorant about firearms will quickly find themselves nodding along with this segment of the interview…