Florida Governor Ron DeSantis just delivered his State of the State address to a joint session of the legislature, something that’s traditionally done at the start of each legislative session. The session started today and the Governor addressed a number of topics; the economy, schooling, immigration, etc. 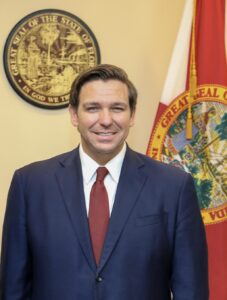 This being The Truth About Guns, I know what you really want to know. What did he say in regards to Floridians’ gun rights? He stated the following . . .

I also recommend that the legislature strengthen protections of Floridians’ Second Amendment rights. These important rights should not depend on the whims of politicians who reject the existence of those rights in the first place.

DeSantis had earlier stated that he’d sign a constitutional carry bill if one reaches his desk. The problem is, the very politicians that reject the existence of Floridians’ Second Amendment rights are the ones running the legislature. Politicians such as Senate President Wilton Simpson (R) and House Speaker Chris Sprowls (R) have never been supporters of constitutional carry in the Sunshine State.

House Bill 103, is assigned to the House’s Criminal Justice & Public Safety Subcommittee, now chaired by Rep. Chuck Brannan III (R) and the same excuses are starting to make the rounds as to why they can’t advance the bill. 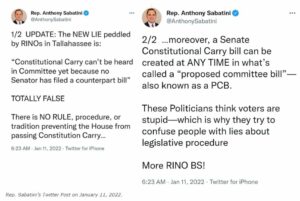 With that, we all know what needs to happen. Rep. Brannan must bring HB 103 up for a recorded vote in his committee. If he fails to do that, he’ll be no different than the “politicians who reject the existence of those rights in the first place.”

If he follows his predecessor’s actions, he’ll be hurting Floridians and further limiting their rights because at the whim of a few elected individuals.