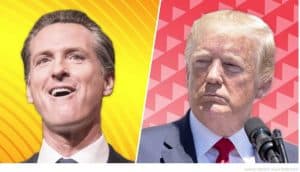 It’s why four voters in California, along with conservative watchdog group Judicial Watch, announced they’ve filed a federal lawsuit against the left-wing state, alleging its new lawaimed at strong-arming Trump into releasing his returns is unconstitutional, as Fox News noted a few days ago.

The sponsors of the legislation understand that Trump’s huge and complex financial empire makes him particularly vulnerable to demands that he release his taxes to political hacks.

And, in doing so, California rejected advice from saner minds — people who argued that, if this were upheld, it would open the door to politicized information and document demands from other states.

Who wouldn’t want to know, for instance, what then-Sen. Joe Biden (D-Del.) might have said during the forced busing controversies of the 1970s?

And wouldn’t it be interesting to see how California felt when red states began requiring certified birth certificates — an issue that goes to the heart of whether a candidate is eligible to run?

It is probably for this reason that America has a long history of protecting privacy against partisan weasels such as the ones that have now emerged in the Golden State’s capital.

In the 1960s, it was the state of Alabama that was working to destroy the NAACP by requiring that it divulge its membership list.

The Supreme Court in NAACP v. Alabama correctly held that this invasion of the organization’s privacy interfered with its constitutional First Amendment rights.

Related: California May Become First State to Pay for Health Benefits for Those Here Without Documentation

People in California seem to believe they can obliterate the two-party system by repealing the fundamental right to privacy, which Americans expect when they send their most sensitive financial data to the IRS.

If California leftists knew anything about the Constitution, they would realize it’s not permissible to add — willy nilly — additional requirements to run for and be elected to the presidency.

But California has had so much success in corrupting its election rules that it now clearly believes there is no limit to its ability to manipulate campaign laws for partisan ends.

If California leftists knew anything about the Constitution, they would realize it’s not permissible to add — willy nilly — additional requirements to run for and be elected to the presidency.

Thus, it encourages undocumented voters through the same ballot-harvesting methods that have invalidated a congressional election in North Carolina.

In many major California elections, the GOP doesn’t even appear on the general election ballot. And now, the state has evolved into a full-fledged Third World tyranny by trying to strike the president of the United States from the ballot.

Let me make a prediction: The courts will not allow Sacramento’s slimy scheme to prevail.

But, in the process of losing, the state will demonstrate to the country that it’s sunk into a cesspool of partisan fraud.

Action Alert: Your Senators Need to Hear from You!