The Trump administration on Tuesday issued a long-awaited regulation banning “bump stocks,” devices that allows semi-automatic rifles to shoot like a machine gun. 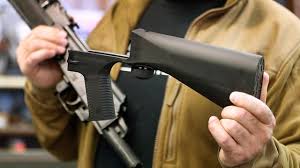 Sen. Chris Murphy, D-Conn., said “I’m happy the Trump administration is finally doing this, but nobody should get a pat on the back for doing away with these mass killing devices. This should have been done a long time ago.”

He also said its important for Congress to ban bump stocks to make it “crystal clear” the government has the authority to ban the devices.

Another reason Democrats said legislation is still needed is that Gun Owners of America, a fierce defender of gun rights, said Tuesday it would sue to block the legislation.

“This… has important implications for gun owners since, in the coming days, an estimated half a million bump stock owners will have the difficult decision of either destroying or surrendering their valuable property — or else risk felony prosecution,” said Erich Pratt, executive director of Gun Owners of America. “ATF’s claim that it can rewrite congressional law cannot pass legal muster. Agencies are not free to rewrite laws under the guise of ‘interpretation’ of a statute, especially where the law’s meaning is clear.”

Pratt said the new ATF regulations “would arbitrarily redefine bump stocks as ‘machine guns’ — and, down the road, could implicate the right to own AR-15’s and many other lawfully owned semi-automatic firearms.”