Cruz Has a Warning For the GOP About Background Check Legislation 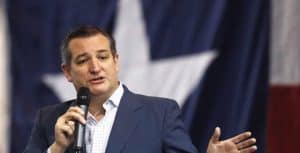 Sen. Ted Cruz warned Republicans not to pursue expanded background checks Thursday at an event sponsored by the Christian Science Monitor, saying that it could jeopardize their chances in 2020.

“If Republicans abandon the Second Amendment and demoralize millions of Americans who care deeply about Second Amendment rights, that could go a long way to electing a President Elizabeth Warren,” replied Cruz when asked about whether he thought President Trump would back a modified version of the 2013 background check proposal from Sens. Joe Manchin and Pat Toomey.