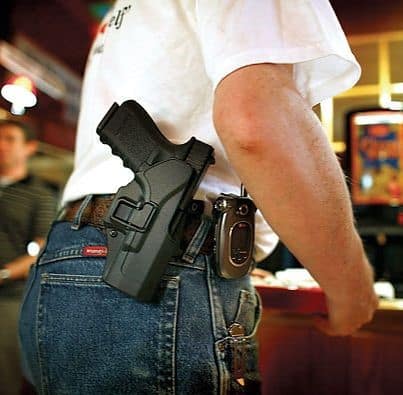 Its popularity keeps spreading inexorably across the country.

And so the train keeps rolling on. For years, advocates of the Second Amendment have fought tooth and nail to ensure that no American was left without the right to obtain a carry permit. Now an even more salutary standard has become fashionable: The abolition of the permitting system in its entirety. In 2015, three states added their names to the growing list of those that have adopted “constitutional carry” — states, that is, in which Americans do not need to obtain permits before legally carrying guns. Last year, another three joined their ranks. This year, the number joining could be as high as five. And after that? Le déluge.

Over at the Crime Research Prevention Center, John Lott Jr. notes that the number of “constitutional carry” states will reach 16 or 17 by the end of this year. Given that 15 years ago there was only one (two if you count Montana, which I’d classify as a “mostly constitutional carry” state) — and that 30 years ago most states had extremely restrictive permitting processes to boot — this is nothing short of remarkable. Elections, as it is said, have consequences.

Lott writes: With Missouri, West Virginia, and Idaho enacting Con­sti­tu­tion­al Carry laws last year, twelve states allow people to carry without a permit in all or virtually all their states. This includes Mon­tana that allows people to carry in about 99.4% of the state. And 2017 is shaping up as a banner year for passing more of these laws. States that are about to pass these laws include: Indiana, Kentucky, New Hampshire, North Dakota, and South Dakota. Tennessee is considering allowing “open carry” without a permit, though that is already quite common in most states. Other states that are considering this legislation, but are unlikely to pass Constitutional Carry, include: Colorado (won’t pass legislature and would be vetoed by governor), Minnesota (Governor would veto), Texas (unlikely to get out of the state legislature), and Utah (Governor would likely veto again).