Earlier separate bans on semiautomatic firearms demonized as “assault weapons” weren’t enough for California gun-grabbers. Despite the Roberti-Roos ban on specific firearm models, and the later Perata ban, a new prohibition went into effect early this year, even though the agency tasked with infringement enforcement admits compliance is impossible.

“Assembly Bill 1135 and Senate Bill 880 became effective Jan. 1 of this year and part of the new law requires those who have assault weapons to register them by Jan. 1 2018,” CBS 13 Sacramento reports. “But the website to do so isn’t working.”

That’s a screenshot from the “Department of Justice” website that not only advises the definition of “assault weapon” has been “revised” (yet again – they’ll get it “right” one of these times), but that:

These bills will require that any person who, from January 1, 2001, to December 31, 2016, inclusive, lawfully possessed an assault weapon that does not have a fixed magazine, as defined in Penal Code section 30515, including those weapons with an ammunition feeding device that can be readily removed from the firearm with the use of a tool, shall register the firearm before January 1, 2018, but not before the effective date of the regulations adopted by the DOJ.

These bills will also require registrations to be submitted electronically via the Internet utilizing a public-facing application made available by the DOJ.

“Many gun owners are frustrated and say it’s been months that they’ve been trying to register and can’t,” CBS 13 elaborates. They’re concerned that if it’s not resolved soon, there will be a mad dash to meet the deadline, only eight months away.” 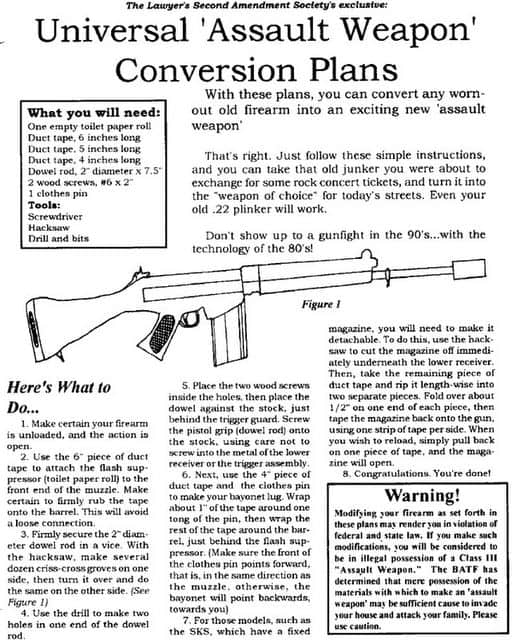 If they don’t, and if they don’t then surrender their guns, they’ll become felons, prohibited persons for life, forbidden to so much as touch a gun. That’s after they have their lives destroyed and “serve” prison sentences where they’re at the mercy of a general prison population that includes every kind of violent, threatening and physically imposing sociopath you can imagine.

After all, most take their lead from the National Rifle Association, which set the tone it expected of its members:

“Bill did what any honest, law-abiding American would do…he turned in his SKS Sporter [a militia rifle] to the police.”

Is that what Captain John Parker would do?

In places like California, the “progressives” have unchallengeable political control. Give them their way with “pathway to citizenship” illegals and “refugees,” and they will culturally terraform the remainder of the Republic to be just like them. The bottom line is, once the “popular vote” has been lost, those clinging to principles will have one of two choices: Abject surrender or defiance.

That’s the new paradigm of “I will not comply,” (not really all that new, but still one disparaged by the rice bowl gun groups, where the major revenue streams come through a lobbying solicitations über alles business model). It’s for when all other peaceable means of redress have been exhausted.

Think of it as an order we will not obey. And remember “the supreme Law of the Land.”

Easy for me to say, from the comfort and safety of my keyboard?

Not always. I tore up their damn registration form in front of them. At an NRA-arranged meeting of all places. Where a handful of us were accused of making the rest of the group look bad…

You’d have to be willfully blind at this point not to realize the gun-grabbers want our guns – all of them. You’d have to be a coward or a fool not to admit the purpose of gun registration is so those who want them know who has them so that they can get them.

Ultimately, there’s one question I keep coming back to:

What would Captain Parker do?