A legal cloud descended over many American gun owners on Monday. 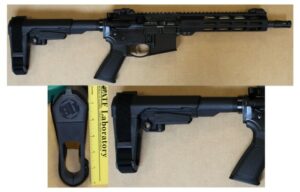 An AR-15 equipped with a stabilizing pistol brace / ATF

A new rule proposed by the Bureau of Alcohol, Tobacco, Firearms, and Explosives (ATF) at the request of President Joe Biden would make most firearms with stabilizing pistol braces illegal. Owners would have to register, turn in, or disassemble the guns to avoid federal felony charges. One government estimate found as many as 40 million guns could be affected.

“It will be the largest gun registration, destruction, and confiscation scheme in American history,” Alex Bosco, who invented the stabilizing brace and founded the biggest manufacturer of them, told The Reload.

The rule outlines a complex point system the agency wants to create to judge when a gun with a stabilizing brace should be classified as a pistol and when it should be classified as a short-barrel rifle requiring registration under the National Firearms Act of 1934 (NFA). The proposal aims to reconcile the ATF’s decade-long track record of approving the braces on a case-by-case basis. That process was often criticized by members of the gun industry and gun-rights movement as arbitrary and contradictory.

But gun advocates said the new system is worse than the old. While the system gives objective measures for the weight or length of the guns affected, opponents pointed to the seemingly random criteria used to determine which braces are legal and which aren’t. They said factors like whether the gun can be easily fired with one hand or whether an attached brace is adjustable in length have no basis in the statute, which sets the line between pistols and short-barreled rifles at whether the gun is “designed and intended” to be pressed against the shooter’s shoulder.

Bosco said the rule would outlaw the vast majority of braces on the market and read like it was “reverse-engineered to make braces illegal.” He called it “arbitrary and capricious.”