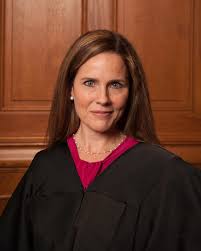 Barrett “has a very expansive view of the right to bear arms and is pretty likely to be hostile to gun control efforts,” according to Adam Winkler, a professor at the University of California at Los Angeles who spoke with Bloomberg Law.

Barrett, a judge on the 7th U.S. Circuit Court of Appeals at Chicago, dissented in the 2019 decision Kanter v. Barr when a panel majority upheld a ban on felons owning firearms.

The felon challenging the law, Rickey Kanter of Mequon, Wisconsin, was banned from gun possession under federal and Wisconsin law after he pleaded guilty to one count of mail fraud. He had been accused of selling shoe inserts that weren’t approved by Medicare while maintaining that they had approval.

The panel majority reviewed the law using intermediate scrutiny, which requires a challenged law to be substantially related to an important government objective. The majority concluded that the gun possession bans was an important goal of keeping guns away from people convicted of serious crimes.

Barrett argued that legislatures have power to keep guns out of the hands of dangerous people but not all felons. She grounded her decision in historical practices.

“Founding-era legislatures did not strip felons of the right to bear arms simply because of their status as felons,” she wrote…

Erich Pratt, senior vice president at Gun Owners of America, told Bloomberg Law that Barrett’s approach indicates “a willingness to examine and apply the Second Amendment as written, by looking at its text and using history as a guide, instead of engaging in the judge-empowering interest balancing that has run rampant in the lower courts.”

Winkler, who also spoke with the National Law Journal, said Barrett’s historical analysis “disregarded a half-century of blanket bans on felons having guns.” He questioned whether Barrett’s narrow view of what counts as relevant history could also put at risk gun restrictions that are, in her view, more recent.

The Supreme Court declined to hear 10 Second Amendment cases in June. Four justices who commented on the decision to decline review appear ready to address gun rights issues, according to the National Law Journal. The four justices—Clarence Thomas, Samuel A. Alito Jr., Neil M. Gorsuch and Brett M. Kavanaugh—have raised concerns that Second Amendment rights are being applied too narrowly…