Email your lawmakers to Support HB 1059 and HB 1694 without any weakening amendments!

You wouldn’t know it from reading or listening to the mainstream media, but pro-gun states have been making big strides on behalf of the Second Amendment in the first months of 2019. 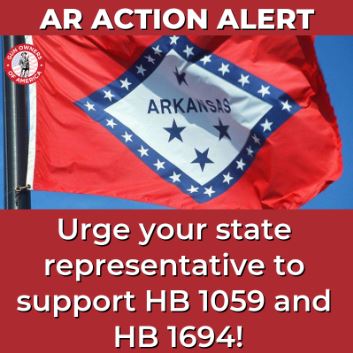 Elsewhere, perhaps hundreds of more school districts are opening their doors to teachers with guns.  And states around the country are improving their self-defense laws.

Which brings us to Arkansas.

Two new bills have been introduced in Little Rock which would dramatically improve the state of the Second Amendment in Arkansas.

The first, House Bill 1059, would improve self-defense laws in Arkansas. This bill would remove your duty to retreat prior to using deadly force in order to protect you and your family.

Anti-gunners will try to paint this bill as bringing “the Wild West” to Arkansas.  But, of course, the states that recognize your ability to defend yourself are the safest in the country — while the places with the strictest gun control, like Baltimore and Chicago, have some of the highest crime and murder rates.

So please take action to support HB 1059 and 1694 — without any weakening amendments!

GOA gets its day in court on bump stocks …