Gun Owners of America is proud to endorse Senator Ted Cruz for the office of President of the United States.

While there are many candidates in the race, Ted Cruz is the only one who has completed and returned the GOA presidential survey on the Second Amendment.

Cruz has been a strong advocate for Second Amendment rights as a U.S. Senator, and he will continue to defend our gun rights from the Oval Office.

Ted Cruz has promised gun owners that, as President, he will remove the United States as a signatory nation to the anti-gun Arms Trade Treaty — a U.N. treaty that would fully implement a system of gun owner registration if ratified by the U.S. Senate. 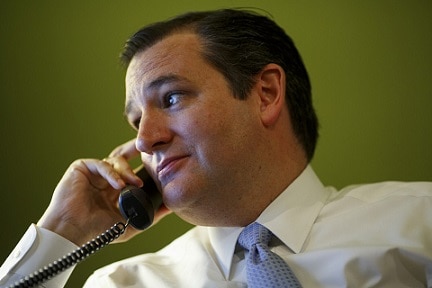 Ted Cruz has promised gun owners that he will repeal anti-gun Executive Orders that circumvent Congress and veto anti-gun legislation if it reaches his desk.

As a U.S. Senator, Ted Cruz has demonstrated a willingness to fight for our Second Amendment rights.  He is working with GOA on legislation to repeal the Obama Administration’s gun ban that is (and will) affect millions of military veterans and senior citizens.

He has opposed efforts to reward millions of illegal aliens with citizenship and voting rights, given that the majority of them are anti-gunners who have ignored and flouted our laws.

He has cosponsored legislation to allow concealed carry reciprocity for law-abiding gun owners.  This legislation (S. 498) is of special importance to GOA members and activists.  It is one of our chief priorities in Congress.

This election season is quickly becoming the “year of the outsider.”  And to that end, Ted Cruz has been able to “speak truth to power” as a member of the U.S. Senate.

It was Senator Cruz who in July of 2015, blasted the Senate leadership for lying to fellow Republicans and the American people. Not only that, just a couple of months prior, he stood on the Senate floor and asked “what exactly is the difference between a Democratic and Republican majority?”

It’s obvious that Senator Cruz follows the Constitution, not a political party.

It was Senator Cruz who led the filibuster fight in 2013 against funding the anti-gun ObamaCare law, which will facilitate the disarmament of millions of gun owners once the law is fully implemented.

While there are many problems with ObamaCare, Cruz recognizes how computerizing the medical records of millions of gun owners will allow the federal government to troll those names and add millions of honest gun owners to the NICS system — in the same way that the Obama Administration is currently using medical information to disarm military veterans, and proposing to do the same with senior citizens.

Ted Cruz has promised to sign a bill to completely repeal ObamaCare as President.  To that end, he has already introduced S. 339, which would repeal the health care law “as if such Act had not been enacted.”

Finally, as we said above, one of Ted Cruz’ chief concerns as Senator has been the creeping “judicial tyranny” in our nation.  We need a President who is going to rein in the courts by appointing judges who reject the notion that our Constitution is a “living and breathing” document that can be twisted to support any crackpot agenda that anti-gun liberals like Harry Reid or Nancy Pelosi advocate.