Dear Friend of the Second Amendment:

A desperate anti-gun lobby is trying to silence Gun Owners of America — and your voice, too — in federal elections. 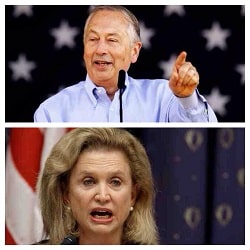 Now they’re insisting the same of a congressional candidate in California.

I’m going to show you the email sent by Josh Horowitz, the Director of the Coalition to Stop Violence, but first let me set the stage.

The hysteria all started when Rolling Stone magazine published a hit piece on GOA’s Executive Director, Larry Pratt, who had the temerity to state a historical fact: that the Second Amendment is not about hunting or sporting, but ultimately about resisting tyranny.

The article was seized upon by Congresswoman Carolyn Maloney, a Democrat from New York City, who called the Capitol Police and the U.S. House Sergeant-at-Arms, claiming that Mr. Pratt was “threatening” lawmakers (seriously, you can’t make this stuff up!)

Not surprisingly, the Capitol Police and Sergeant-at-Arms recognized Maloney’s unwarranted attack for what it was — a political ploy.

That should have been the end of the story, except that now the anti-gun lobby has picked up the ridiculous charges and is going after strong Second Amendment candidates who are supported by GOA.

But don’t take my word for it, here’s what the Coalition to Stop Gun Violence posted on its website (and notice the creative use of quotation marks — or the lack thereof in strategic parts — which I’ll explain below):

As a California Senator, you understand that there are times when you will disagree with your colleagues about important issues and legislation. But there should never be a time when those disagreements lead to threats and/or violence.

Unfortunately, one of your donors, Larry Pratt of Gun Owners of America (GOA), does not feel the same.

In March 2014, upon learning that Rep. Carolyn Maloney and other Members of Congress feared that GOA members might feel compelled to shoot them if they voted for gun reform, Pratt stated, “You know, I’m kind of glad that’s in the back of their minds.”

Then, on July 23rd, Pratt posted “An Open Letter to Congresswoman Carolyn Maloney” on GOA’s website. In that letter, Pratt threatened:

“Should you attempt to disarm Americans the way the British crown tried 240 years ago, the same sovereign people who constituted this government using the cartridge box someday may need to reconstitute it, as clearly anticipated by the Declaration of Independence.”

Senator Knight, as someone who spent 18 years enforcing the law with the Los Angeles Police Department, you should be the first to reject this type of treason and vigilantism. Americans hold different, and passionate, views on the gun issue. But we can express those differences—and debate them—without threatening one another. Larry Pratt has obviously crossed a line in suggesting his members might shoot a Congresswoman who votes in a way they believe is unconstitutional. By continuing to accept money from GOA you are sending a dangerous message that you, too, share this radical view.

Please return the $4,994 that Larry Pratt of Gun Owners of America (GOA) gave you during the current election cycle.

First, much of what Horwitz deems as threatening was not placed in quotes, because those were not words used by Pratt.

Pratt talked about the right to keep and bear arms as being the final defense against tyranny — he did not say it was the remedy for a crazed individual who is upset with how their legislators voted.

Secondly, Horwitz wants to ignore that everything Mr. Pratt did say was actually consistent with what the Founding Fathers believed.

So Horwitz, who is out-of-step with our history, resorts to putting words in Pratt’s mouth because he wants to silence GOA’s voice — and yours.  But that’s not going to happen.

GOA is on the counter-offensive and continues to speak the truth about the meaning of the Second Amendment.  And the candidates GOA supports will stand strong in defense of your gun rights — which is why we supported them in the first place.

Will you help us spread this pro-gun message to even more gun owners?  We need to reach out to Second Amendment supporters in every congressional district so they will know what kind of extremism we’re facing as we head into the fall elections.

You can go here to chip in a contribution of any amount to help GOA let voters across the country know about the true pro-gun candidates for Congress.

Thank you for standing with GOA.

P.S. With the elections less than two months away, the anti-gun lobby wants nothing more than to defeat candidates supported by GOA.  Please stand with GOA in defense of liberty and the Second Amendment.

Smokey is the Bandit: Concealed Carrier Kills Carjacker Posing As a Cop in Texas