The Obama administration quietly has been forcing new gun buyers to declare their race and ethnicity, a policy change that critics say provides little law enforcement value while creating the risk of privacy intrusions and racial profiling.

With little fanfare, the Bureau of Alcohol, Tobacco, Firearms and Explosives (ATF) in 2012 amended its Form 4473 — the transactional record the government requires gun purchasers and sellers to fill out when buying a firearm — to identify buyers as either Hispanic, Latino or not. Then a buyer must check his or her race: Indian, Asian, black, Pacific Islander or white.

The amendment is causing a headache for gun retailers, as each box needs to be checked off or else it’s an ATF violation — severe enough for the government to shut a business down. Many times people skip over the Hispanic/Latino box and only check their race, or vice versa — both of which are federal errors that can be held against the dealer. 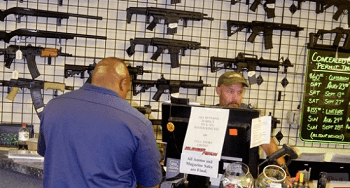 Requiring the race and ethnic information of gun buyers is not required by federal law and provides little law enforcement value, legal experts say. And gun industry officials worry about how the information is being used and whether it constitutes an unnecessary intrusion on privacy….

The 4473 form is supposed to be kept in a gun retailer’s possession at all times — allowing ATF agents to inspect the form only during the course of a criminal investigation or during a random audit of the dealer. The form is to be kept out of the hands of the government, hence the distinction between “sales/transaction form” and “registration form.” But that isn’t always the case, gun rights advocates say.

“We’ve been contacted by several dealers saying ATF is or has been making wholesale copies of their 4473 forms, and it’s just not legal,” said Erich Pratt, spokesman for Gun Owners of America, a gun advocacy group. “If this is what they’re doing somewhat out in the open, what’s going on behind closed doors? Are these names and demographic information getting phoned [in and] punched into a government computer? Do they ever come out?”…

Although gun advocates speculate on the reasoning behind changing the form, on one thing they are clear: Requiring ethnicity and race to purchase a gun is a clear government overstep, violating Second Amendment rights.

“It’s an overreach, not authorized by Congress, taken upon [by ATF] unilaterally,” said Mr. Pratt. “The president has said his biggest frustration has been not getting gun control enacted — but we can see he’s been very active with his phone and his pen. And this certainly — either intentionally or unintentionally — feeds that notion.”

Smokey is the Bandit: Concealed Carrier Kills Carjacker Posing As a Cop in Texas