Your Activism is Making a Difference in Congress

You Activism is Making a Difference!

It couldn’t have been a better outcome! 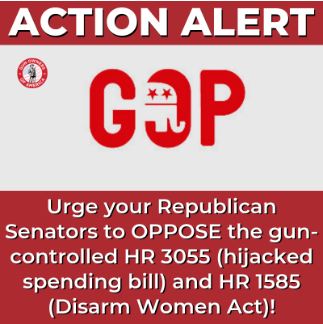 Many of you emailed your Representative, pointing out that the Democrat’s Justice Department Appropriations Bill (H.R. 3055):

The good news is that the House Republicans heard you!

Last week, every single Republican who was present on the House floor — all 193 of them — unanimously voted to send this legislative garbage to the trash compactor.

Yes, the bill passed because the Democrats have a majority, but NOT ONE Republican joined them. That’s huge.

Since the Senate is controlled by Republicans, the universal GOP opposition to the bill in the House will make it much more difficult for Speaker Nancy Pelosi to convince her Senate counterparts to take this anti-gun bill seriously.

The next task is to make sure every Senate Republican knows this bill was rejected by their counterparts — and to understand why.

One more thing: Pelosi’s use of this Commerce-Justice-Science Appropriations Bill (H.R. 3055) to push an unadulterated Democrat wish list gives us another insight into this year’s Standard Operating Procedure.

Increasingly, House Democrats are sending over large, anti-gun Leftist wish-lists on “must-pass” bills and demanding that Senate Republicans negotiate over them.

And, rather than throwing the most extreme aspects of the Alexandria Ocasio Cortez socialist agenda into the wastebasket—and sending back a stripped-down bill—Senate Republicans are increasingly lumbering into Pelosi’s trap.

The pattern was set with the Violence Against Women reauthorization (VAWA), where Democrats crammed a red flag Gun Confiscation Order into the bill.

Hapless Judiciary Committee Republicans are now threatening to give Pelosi half of the crazy anti-gun and Leftist things she wants.

If Senate Republicans negotiate over the Leftist wish list on VAWA (H.R. 1585), the pain, for them, will never stop.

Every Republican Senator needs to hear from GOA members right away!

So please take action (above) and send Republican Senators a specially crafted message for them. Tell them to OPPOSE both the CJS and the VAWA gun control bills.

John R. Lott, Jr. and Andrew Pollack: Dems and gun control — they want it whether it works or not