GOA-Backed Candidates to Face Off Against Manchin, Tester in November

Another Key Win for Gun Owners

Yesterday was a good day for gun owners. 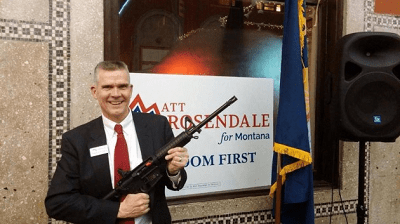 Gun Owners of America-endorsed candidate Matt Rosendale defeated three others in the Republican primary for U.S. Senate in Montana and will now take on Democrat anti-gun Senator Jon Tester in November.

This comes on the heels of a tremendous win in West Virginia, where GOA-backed Patrick Morrissey will face off against gun-grabbing Senator Joe Manchin in the general election.

The importance of these races cannot be overstated.

You remember this year that, after the U.S. House passed national concealed carry reciprocity, it got stuck in the Senate.

The reason was that fake pro-gun Democrats like Tester and Manchin claim to support gun rights, but in reality, they’re nothing more than Schumer puppets in the Senate.

Anti-gun Democrats are pinning there hopes on a “Blue Wave” election in November.

They believe — and not without merit — that if they win control of the House and Senate, a ban on semi-automatic firearms, universal background checks, and more could become a reality.

That’s why George Soros, Michael Bloomberg, Oprah Winfrey and others are pouring tens of millions of dollars into races across the country.

The bulwark of defense for gun owners is in the U.S. Senate.
Thanks to the wisdom of our Founding Fathers, every Senator — no matter the size of the state — is equal in power, and a single Senator can bring proceedings to a halt.

You’ve seen Senators like Ted Cruz and Rand Paul challenge the leadership in recent years — much to the dismay of the entire ruling class.

Senators Paul and Cruz, incidentally, were supported by GOA in their respective primaries in 2010 and 2012.

In fact, GOA was the only national gun group to endorse both of those candidates in what were very competitive primaries. Because we know that primaries are usually where we determine who the true fighters are.

That’s why we did not sit on the sidelines in West Virginia and Montana.

West Virginia’s Attorney General Patrick Morrissey pushed hard for constitutional carry, even after it was vetoed by that state’s governor. 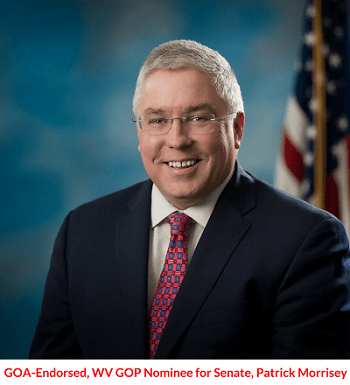 His Democrat opponent, Joe Manchin, teamed up with Pennsylvania’s Pat Toomey to pass massive gun control both after the tragic shooting at Sandy Hook elementary school and again following the Parkland shooting.

And Montana’s Jon Tester hasn’t lifted a finger to pass concealed carry reciprocity or to stop the expansion of background registration checks.

Yet both of these Democrats, when they’re campaigning at home, swear up and down that they support the Second Amendment.

But we know better, and I know you are not fooled either.

This is your chance to adopt a Senator

The two Senate races in Montana and West Virginia are marquee matchups. They will be close … they will be nasty … and they will be expensive.

But no matter where you live, Patrick Morrisey and Matt Rosendale will be fighting for your gun rights.

In addition, GOA is supporting candidates up and down the ballot who will not waver in support of the Second Amendment.

At times it seems that the Left is on the ascendancy, with anti-gunners crisscrossing the country pushing their radical agenda.

But we can take heart in the fact that there are tens of millions of voters who care about the Constitution and our rights.

We will win if we focus our efforts and pool our resources. We can keep Nancy Pelosi and Chuck Schumer from becoming leaders of the next Congress.

If you have given to GOA recently, thank you. I hope you feel we’ve kept faith with you and spent your money wisely.

If it’s been a while since you’ve contributed — or even if you never have — now is a vitally important time to get involved.

As I mentioned, it’s in the primaries where we find the best candidates. And there are important primaries taking place all across the country between now and September.

So thank you for standing with Gun Owners of America at a time when our gun rights are under intense attack on every level.

P.S. Gun Owners had a big win last night in Montana with Matt Rosendale. And another one a month ago in west Virginia with Patrick Morrissey. GOA is involved in races across the country, which is only made possible with your support.

This Photo Of Donald Trump Jr. Showing Off A Belt With A Built-In Pistol Is On A Whole New Level