Last Chance to Get Your AR-15 this Independence Day

Last Chance to Win Your AR-15!

Click to enter and win your engraved AR-15!  The sweepstakes closes at midnight on July 4. And click here to become a GOA Patriot this July 4!

It’s an inconvenient truth — for the Left.

But when we celebrate the independence of our great country tomorrow — the greatest, most powerful, and, generally speaking, the most beneficent nation in the history of the Earth — what we are celebrating is the use of guns to defeat tyranny.  Period. 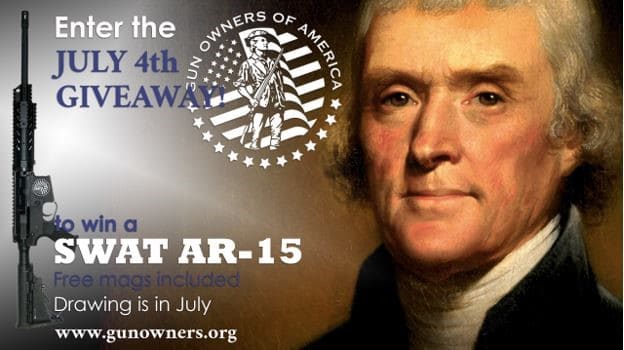 When the British marched toward Concord on April 19, 1775, they weren’t trying to shut down a newspaper.

They weren’t marching to stop a peace rally.

They weren’t moving to shut down a college.

The British intended to seize an arsenal of guns, ammunition, and explosives located at Concord, Massachusetts.

Thus, although the American Revolution was spurred by revolutionary ideas and great thinkers, it was fought out in one gun battle after another — led by a man who became known as the “Father of our Country,” initially as a military strategist and commander of an armed militia.

Had our Forefathers not fought for our liberties with guns, the ideas would have eventually become irrelevant.

No doubt, this is why we celebrate the day with explosives, rather than throwing powder puffs.

So we remember these brave men and women tomorrow.

The signers of the Declaration of Independence pledged their lives, their fortunes, and their sacred honor.  They put it all on the line.

And so we honor those who fought in the Revolution and in each war since then.

So Happy Independence “Through Guns” Day!

P.S. Thank you for standing with us so far this year.  On this July 4, I hope that you will become a GOA Patriot, to help us rally more gun owners in the cause of liberty!