Voice Your Outrage Over the ATF’s Threat to AR-15s

Please click on the Take Action button to contact the Bureau of Alcohol, Tobacco, Firearms and Explosives (ATF). Tell them their proposed rule is fatally flawed, and will lead to a ban on semi-automatics, in addition to the existing ban on bump stocks.

There are now just over two weeks left to comment on ATF’s proposed regulations ban on bump stocks and semi-autos. 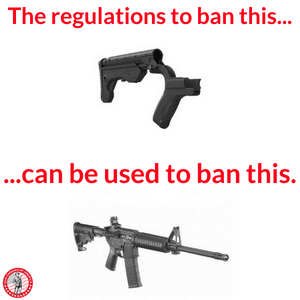 For starters, the proposed regulations would ban bump stocks outright — and turn gun owners who fail to comply as instant felons.

It would do this by classifying bump stocks as “machineguns.” And, under the Hughes Amendment (18 U.S.C. 922(o)), every “machinegun” manufactured after May, 1986, is banned for civilian use with no grandfather clause or no grace period.

Now, you may not care about bump stocks … may not own a bump stock … and may think these regulations are harmless because they won’t affect you in the least — but that’s where you would be wrong.

These regulations would most certainly set the table for a future ban on millions of semi-automatic firearms.

Well, if that’s so, then the same can be said about many other common items around the house — belt loops, rubber bands, index fingers, etc.

The current regulations do not classify any AR-15 or other semi-automatic rifle you own as a machine gun — not yet.

But gun owners should not be surprised if a future anti-gun administration uses these ATF regs to deem that semi-autos like AR-15s are too readily convertible to machine guns.

1) According to these regulations, a bump stock can “readily restore” a semi-auto into a machinegun, simply because the gun owner can effectively fire the weapon continuously with a “single pull” of the trigger.

And as noted above, given that there are a countless number of items which can be used to bump fire a semi-auto, an anti-gun administration could deem that millions of rifles are “readily restorable” and, therefore, are banned.

I don’t believe this is the result desired by the current administration. But it’s the unintended consequences of gun control that we have seen over and over again.

The Slippery Slope of Gun Control

Remember how Obama tried to use the armor piercing bullet ban to outlaw common green tip M855 ammo for the AR-15 — or build upon prior import bans to outlaw semi-automatic shotguns?

Or how he attempted to use laws regulating gun dealers to punish private gun owners selling more than one personal gun with five years in jail and a $250,000 fine?

Or when he expanded the reach of the anti-gun ObamaCare law by telling doctors they could glean information on gun owners and feed them into a federal database?

Or when he sought to expand the so-called NICS Improvement Act to outlaw millions of Social Security recipients from owning firearms?

Gun control leftists are constantly trying to expand the reach of every gun control law on the books.

Consider how the Brady Law has resulted in hundreds of thousands of military veterans losing their gun rights.

Or how laws supposedly aimed at stopping criminals from carrying weapons have incarcerated innocent victims like Shaneen Allen, a lawful concealed carry holder from Pennsylvania.

Examples of gun control’s slippery slope abound at the federal and state level. 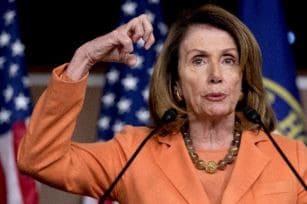 Well, she may be right. And gun owners may one day look back at these bump stock regs as the catalyst that gun banners used to ban AR-15s and other semi-automatic firearms.

The comment period on this AR-15 ban will be closing soon (June 27). You have just over two weeks to make your voice heard.

Please feel free to use our suggested comments here. You can copy-and-paste our prewritten text to the ATF — or amend them in any way you deem fit.
So please submit your comments to the ATF and tell them you are 100% against any infringement of your Second Amendment rights.

P.S. Our best chance of defeating this bump stock/AR-15 regulation is by overwhelming the administration with comments in opposition. So please click on the “Speak Up Now” button below and take action today. And if you’ve let your membership lapse, make sure to renew your membership in Gun Owners of America today for only $20!