I recently received a letter from a high school girl in San Francisco. It was a handwritten letter—courteous in tone—which pleaded for us at GOA to consider several gun control restrictions.

This teenager said she was “not asking for much”—just bans on bump stocks, AR-15s and similar type firearms, as well as stricter background checks.

Gee, not that much? I would hate to see what “asking for much” would look like.

But it reminded me once again that in this battle to protect our gun rights, the anti-gun Left is trying to weaponize our children against us. 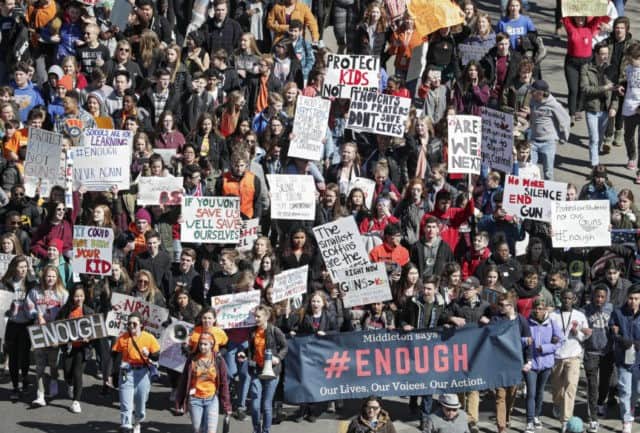 Right after the shooting in Parkland, Florida, GOA received calls from teenagers who begged us to reconsider our position on gun control. The calls were repetitive and obviously scripted, and any attempt to ask the students to explain HOW gun control would have made a difference was met with silence.

In the weeks that followed, our government schools across the nation supported efforts by students to walk out of class as a “silent way” to speak up for gun control. Of course, dissenters were persecuted, ostracized, harassed and disciplined.

But back to this girl from San Francisco. It is not surprising how many leftist ideas and “buzzwords” her short message included. She said she did not want to take guns away from every American citizen—thus implying she only wanted so-called reasonable, common-sense restrictions.

She referred to the AR-15 as a weapon that is only “used to kill [and] not defend or protect.” She described the “large exit wound” that an AR-15 cartridge supposedly leaves, claiming that the rounds are designed to “tumble upon impact and destroy flesh.” And she ended her letter with a note that the gun industry might lose money because of a ban on “assault weapons” and bump stocks, but “children’s lives are more important than capitalistic greed.”

So she begged me, “I hope you’ll reconsider your stance. If not for my safety, then for the safety of your children, nephews, nieces, and grandchildren.”

No facts. No logic.

Simply an emotional appeal, with a side swipe against capitalism—something that her socialistic-leaning teachers [remember, this letter came from San Francisco!] would no doubt approve of.

As a father of ten children—and a grandfather—I have a heart for the next generation and even teach civil government in my spare time to high school seniors. So, although this was just one girl from a very liberal part of our country, I wanted to reach out to her with a response.

For starters, I thought it was important to explain that our rights do not come from the government. As stated in our Declaration of Independence, all men are “endowed by their Creator with certain unalienable rights.” This means our rights do not change because technology advances. Just as free speech applies to blogs and the internet, the Second Amendment applies to modern firearms.

I also reminded her that there are FAR BIGGER threats to the safety of Americans—something she was, no doubt, overlooking because the media is constantly conditioning the public by demonizing AR-15s. To name just one example: the FBI reports that personal weapons like “hands and fists” kill almost 700 times a year, while rifles of all types (of which AR-15s would be just a small subset) are involved in less than 400 murders per year.

So I asked her: “Would you favor putting the entire population in handcuffs? That may sound like a silly question, but you would actually be targeting a bigger killer [than AR-15s]”

I also explained that Americans have often used AR-15s to defend themselves—contrary to what the Fake News media likes to spoon feed to the public. I listed several examples from around the country—including the amazing story from Florida where a gun owner used an AR-15 to defend himself against seven home invaders.

I then pointed out that hunting ammunition is actually far more powerful than the 5.56 ammo she considers so deadly.

And I concluded with several examples of mass shooters who either passed or evaded background checks—further demonstrating the futility of gun control.

Now, some might wonder: Why even bother? She’s not going to change her mind, right?

Well, not so fast.

GOA spokesmen have been to countless high schools and universities to speak to students about the Second Amendment. One of the encouraging things we see is that there are a lot of them who are bucking the leftist trend and thinking for themselves. We see it in our anecdotal conversations with students on campus. (I have personally had students tell me that they have changed their minds on gun control, after hearing me present the facts.)

We see it in the public testimonies from outspoken converts, one of whom became a GOA member just recently.

H.A. Goodman is an author and a former contributor to the liberal Huffington Post, and he is the author of several anti-gun articles. But that was then. He has now seen the light. Goodman says that he recently joined gun rights groups like “Gun Owners of America because the groupthink that I once spewed hurts law-abiding citizens and does nothing to prevent the next deranged copycat criminal.”

It’s testimonies like this that should give us hope, because in the battle for ideas, the presentation of facts do make a difference.

The mainstream media tries to make it seem like the overwhelming majority is against us. But polls show that millennials are less supportive of gun control than any other age group, and that 73% of Americans agree that the Second Amendment guarantees the right of individuals to own firearms.

So if you are a gun rights’ supporter, take heart. We are winning the fight on most battle fronts. And the energy we expend combating the lies is well worth the effort.

Erich Pratt is the Executive Director of Gun Owners of America, a grassroots organization representing more than 1.5 million gun owners.

This article first appeared at Breitbart.com