Written by Michael Hammond Published: 22 May 2019

Are gun owners close to stopping Red Flags in VAWA?

Urge your Senators to reject any bill with Red Flag Gun Grabs!

Keep Up the Pressure to Stop Gun Control in the Senate

For weeks, we have been pushing the Senate GOP to trash the gun control package which Nancy Pelosi sent over as part of the Violence Against Women Act (or VAWA). 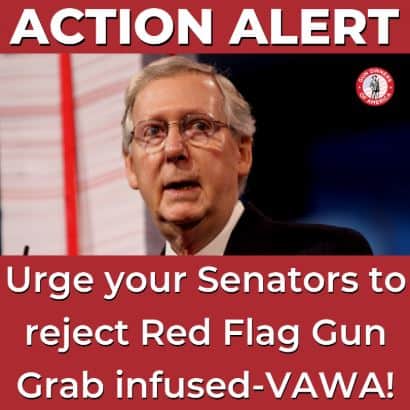 Apparently, Majority Leader Mitch McConnell has heard our requests — and intends to do what we asked him to do.

Thanks to those of you who recently acted on GOA’s alert and contacted Senator Mitch McConnell’s office.

Having mobilized thousands of gun owners to contact him — all of them urging McConnell to “veto” the gun control in VAWA — that level of pressure can only help our position. Clearly, it’s now paying dividends.

Of course, this has Democrat Senator Chuck Schumer of New York up in arms — so to speak. Schumer took to the Senate floor on Monday to blast the Republican leadership for even considering this move to scuttle the Democrats’ gun control initiative.

So here is where we are at: Under the House-passed bill, anyone you’ve ever dated could petition a “secret court” to strip you of your Second, Fourth, Fifth, and Fourteenth Amendment rights — with no Due Process whatsoever.

The first thing you would learn of it is when the SWAT Team arrived at your door in the middle of the night — ready to ransack your house and, if you resist, to arrest or shoot you.

The sneaky Pelosi figured that, if she attached gun control to something called the “Violence Against Women Act,” the Senate would have no choice but to accept it.

But now McConnell appears ready to throw the whole Pelosi package in the wastebasket — and to send a stripped-down reauthorization of VAWA (without gun control) back to the House as part of a must-pass disaster relief bill.

If McConnell does whatever he’s promising — which is the very thing that has Schumer so upset — we will have killed Pelosi’s efforts to enact gun control by the back door.

The first test vote will probably be today or tomorrow. The bill number could be H.R. 2157, although that could change.

The pro-gun vote will be “yes” to shut off the filibuster and pass the bill which contains no gun control.

So please urge your Senators to reject any bill that includes Red Flag Gun Grabs above.