Will Pennsylvania join the seventeen states already in the “Constitutional Carry Club,” including our neighboring state of West Virginia? 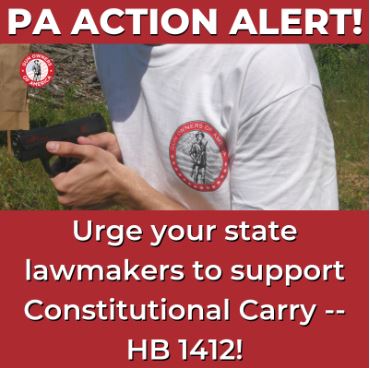 What is Constitutional Carry? It’s the simple principle that you don’t have to ask the government for permission to carry a firearm for self-defense.

Representative Bernstine’s bill would affirm the Constitutional right of every person inside Pennsylvania to keep and bear firearms without a permit, including the right to carry openly or concealed, loaded or unloaded.

For those who wish, the bill includes an optional license to carry firearms that will provide reciprocity with any state with which Pennsylvania has an agreement.

HB 1412 also eliminates the restrictions on carrying firearms on public streets or public property in Philadelphia. And it removes certain knives from the definition of “offensive weapons.”

States that have adopted Constitutional Carry rank among the safest in the nation, as repeatedly demonstrated by states like Maine and Vermont that always rank near the top of the list of safest places.

But gun owners in Pennsylvania need to be vocal for Constitutional Carry to become law.

So please urge your state senator and representative above to support Constitutional Carry — HB 1412!