Senate Considers Thrashing Your 2A Rights in HR 1585

Take Action and urge your Senators to OPPOSE the gun control in HR 1585.

House Speaker Nancy Pelosi has launched yet another campaign to outsmart Senate Republicans.

And if she is successful this time, the result will be a massive new national program of gun confiscation — conducted with no due process whatsoever. 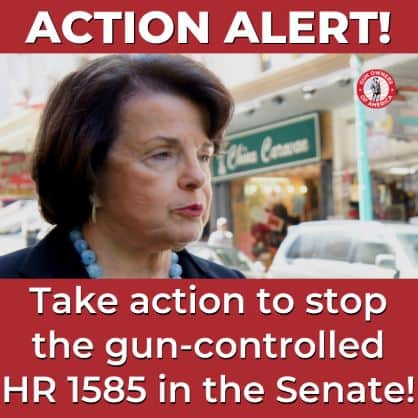 First, a little background:  In 1994, then-Senator Joe Biden created the Violence Against Women Act (VAWA) program.  While everyone opposes domestic violence, this bill was intended to be a vehicle for a wish-list of liberal priorities.

The bill is now up for reauthorization.  And while radical liberals, and anti-gunners care deeply about it, the failure to reauthorize it would be no particular loss to anyone else.

But rather than begging for Republicans to fund a Leftist program, Nancy Pelosi has, instead, loaded the House-passed version with gun control, tax increases, and discrimination against religious charities.

On gun control, the bill would allow anyone you’ve ever dated to convene a “secret court” to strip you of your Second, Fourth, Fifth, and Fourteenth Amendment rights with no due process whatsoever.  They could do so by alleging to a pliant judge — without proving — that you “scared” them or “harassed” them.

In addition, the bill would push for the imprisonment of veterans, traffic ticket scofflaws, and others who tried to purchase a gun without realizing the government had taken their Second Amendment rights away from them.

The House bill, H.R. 1585, was such a nightmare of liberal orthodoxy that a large majority of House Republicans voted against it.  And the chairman of the House Judiciary Committee Collins predicted the bill would be dead on arrival in the Senate.

But now radical anti-gunner Sen. Dianne Feinstein is trying to bludgeon Senate Republicans — and particularly Iowa Republican Joni Ernst — to “negotiate” over the basis of the House-passed liberal wish-list.

It doesn’t take a genius to realize what could go wrong.  When the only question is whether you get 90 percent, 50 percent, or 20 percent of a sack of garbage, the one certainty is that you’re going to end up with a sack of garbage.

So Joni Ernst is now the one who will determine whether nightmarish, Orwellian gun control passes into law — or not.

And if she capitulates, Michael Bloomberg, Gabrielle Giffords, etc., will end up massively energized.  And the Second Amendment will emerge as an injured, limping, bloodied victim.

Not surprisingly, Ernst is up for reelection.  And Feinstein is holding out the threat that Ernst will be portrayed as “anti-woman” unless she destroys the Second Amendment.

So please take action and urge your Senators [above] and Sen. Mitch McConnell [below] to stand firm for gun rights.