Tell Your Rep. to Support HB 444, Not a Compromise!

Urge your state representative to support HB 444, and not a compromise bill!

In New York, a drug addict can mug you on the subway. And, if you have the temerity to try and defend yourself, you go to jail, and the drug addict sues you for damages.

In Idaho, people believe that they should be able to defend themselves against criminals who invade their homes.

So it is confounding that there are some Idaho legislators who are preparing a “squishy” alternative to House Bill 444, the good “stand-your-ground” bill.

Don’t try to find out what’s in the “squishy” bill, because it’s currently a secret. The sponsors don’t need to disclose the contents until they move for a print hearing, probably next week. And, although they could voluntarily release a draft, they haven’t.

Why do you think that is? Normally, if people think they have a bill that stands up to scrutiny, they’re happy to show it to you.

Make no mistake about it: The good bill, House Bill 444, is an excellent example of legislative craftsmanship: 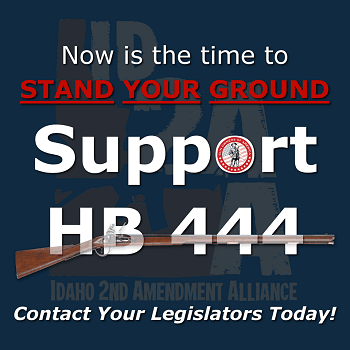 But understand this: Criminals WOULD NOT be able to benefit from this bill.

Section 18-4009A(2)(c) makes the bill inapplicable to anyone who was “knowingly engaged in an unlawful activity.”

So this means, the “stand-your-ground” provisions of 18-4009A do not apply to anyone who is “knowingly engaged in an unlawful activity…”

And, since the judge has discretion over the amount of the legal fees awarded, he is free to award one penny in a case where he believes paying legal fees would be unjust.

It’s pretty clear what’s happening here: Some lobbyists are so arrogant that they won’t support something they didn’t draft themselves. And the result is inevitably that they try to scrounge for votes by crafting a mealy-mouthed alternative that can receive support from anti-gun legislators.

But Idaho doesn’t have to settle for a secret do-nothing draft. In this pro-gun state, we have a right to expect a pro-gun “stand-your-ground” bill — not a “squishy” compromise.

So please contact your state representative to support HB 444, and not a “squishy” compromise bill.

And there’s one more thing you can do. Our friends at the Idaho Second Amendment Alliance (in conjunction with us at GOA) have produced an image in this email to show support for HB. 444. Please change your Facebook profile picture to the image to show your support!

PS: Please change your Facebook profile picture to the image above to show your public support for HB 444, and then urge your state representative to NOT compromise on Stand Your Ground!

Anti-gun Bill to be Heard in Senate Committee on Tuesday