Take all of the worst anti-gun fanatics this nation has endured, over the years — Sarah Brady, Ted Kennedy, Dianne Feinstein, Carolyn McCarthy, Frank Lautenberg, Carolyn Maloney and Charles Schumer.  Their combined best efforts to destroy America’s gun rights would pale in comparison to what will happen to us if America signs and ratifies the UN Arms Trade Treaty (ATT). — GOA Executive Director Larry Pratt (September, 2013)

The UN Arms Trade Treaty is one of the greatest threats to gun owners’ rights.

The Obama Administration signed the treaty in September, 2013, but it still has not been ratified by the U.S. Senate.  Gun Owners of America has been on the ground, working hard to persuade Senators to reject this insidious treaty — and we’re winning … for now!

And with your help, we’ll be sure to prevail!

Gun Owners of America is an army that is more than 500,000 strong.  And each new gun owner who joins GOA adds to the loud voice that we have inside the halls of Congress.

Even the liberal media has had to acknowledge the power of GOA’s grassroots:

* “Back in April [when gun control was defeated in the Senate], Gun Owners of America showed with one email alert that it could help flood the phone lines on Capitol Hill days before the Senate vote.” — National Public Radio, December 26, 2013

Click here so that YOU can join the citizen army of GOA activists.

Your $20 contribution to join GOA will be multiplied many times over as you join forces with the nation’s fiercest and savviest “no compromise” gun lobby — and all for less than it costs to buy a box of ammunition!

With your voice, we can (together) drive the final nail into this odious, anti-gun UN treaty.

GOA’s legislative counsel has done a word-by-word analysis of the ATT, which can be seen here. If left unchecked, the treaty language will give rise a wide-ranging series of gun control restrictions.

The Arms Trade Treaty would ban whole categories of firearms, including semi-automatics and handguns.  It will require universal gun registration and licensing. And its requirement for microstamping would, effectively, ban most guns and ammunition.

The language contained in the Arms Trade Treaty gives Obama and the anti-gun lobby all the cover they need to implement all the gun control measures they have long sought without any further legislation, including:

* A national registry of gun owners; 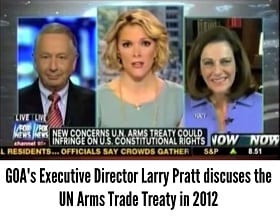 * A ban on interstate movement of any firearms;

* A ban on imported firearms; and, possibly,

* The elimination of most small gun shops through excessive regulation and paperwork requirements.

It gets even worse.  The specific language of the treaty states that each signatory of this treaty “shall take measures necessary to implement the provisions of this Treaty and shall designate competent national authorities in order to have an effective and transparent national control system regulating the transfer of conventional arms.”

We might not think of the ATF as a “competent national authority,” but this treaty, if ratified by the U.S. Senate, will certainly be administrated by the ATF — a federal agency that has demonstrated, again and again, that its real mission is to deny citizens their right to keep and bear arms.

Combine all of this with the President’s ability to use “Executive Orders” to bypass Congress and the Courts, and you can see how our gun rights can be wiped out overnight.

It is entirely possible that, under the Supreme Court cases of Missouri v. Holland and Reid v. Covert, Obama could implement these restrictions without further legislation.  After all, we’ve already seen the President do an end-run around Congress by issuing 23 executive actions last year.

Gun owners will rightfully counter that the UN — or Congress or the President, for that matter — has NO AUTHORITY to impose any of these gun restrictions upon us.  And those gun owners would be absolutely correct!

But if the President begins illegally implementing the UN treaty “by executive fiat” — just as he has done through other executive actions — then good people will go to jail for resisting these efforts and will have to defend their rights in court for simply exercising rights that were given to them by God.  And these courts will be packed with Obama-appointed judges.

The good news is that we are making headway in the Congress.

GOA has been working to make sure that we maintain enough votes to keep this treaty from being ratified by the Senate.   We have circulated legislative language defunding any Obama effort to implement the ATT by executive fiat.

Thankfully, a defunding amendment was inserted into an appropriations bill, and that language was recently signed into law.  But we must keep the pressure on our legislators to oppose every effort by President Obama to use his Executive Order pen to make and end-run around Congress.

In January’s State of the Union Address, the President said:

Wherever and whenever I can take steps without legislation to [act], that’s what I’m going to do…. I intend to keep trying, with or without Congress, to help stop more [gun-related] tragedies from visiting innocent Americans in our movie theaters, shopping malls, or schools like Sandy Hook.

So even though Congress killed gun control in 2013 … and even though restrictions on implementing the ATT were recently signed into law … we can’t underestimate the ability of the President to ignore the will of Congress.

This is a very serious issue for our nation.  Throughout history, nations have been destroyed and their people enslaved by disarming the civilian population.  Every tyrant through the ages first confiscated all weapons before tightening the stranglehold on the people.

Ridiculous?  Couldn’t happen here?  Of course it can!  It can and does happen wherever people drop their guard.  And that’s why James Madison gleefully remarked that our country possesses “the advantage of being armed, which Americans possess over the people of almost every other nation… [where] the governments are afraid to trust the people with arms.”

1. Click here and join GOA today! Become a part of the organization that was credited by liberals and conservatives alike as being THE GROUP that was responsible for killing gun control last year.  See:

* “According to conservative staffers, Gun Owners of America was the most active outside group in early efforts to block all gun control efforts.” — The Examiner, April 28, 2013

So join GOA and become part of the most aggressive no-compromise gun lobby today!

2. Join GOA’s free email alert system so that you can continue receiving important legislative updates on threats to your Second Amendment rights!

3. Click here to Contact your Senators to oppose ratification of the UN ATT and to continuously rein in any attempt by the President to circumvent Congress.