Urge President Trump to Rein in the ATF!

And follow up your email with a phone call to the President at (202) 456-1111 to let him know that Americans stand behind him in opposing ALL 2A restrictions.

Not a GOA member yet? Join Gun Owners of America today and Double Your Dollars, at no extra cost to you, because of a generous matching fund set up by a GOA Life Member.

I just sent a letter to President Trump.

The Las Vegas shooting has spawned a feeding frenzy among the political left.

And in response, some Republicans are asking the President to use the ATF to impose gun control.

This is the reason that I wrote the President. 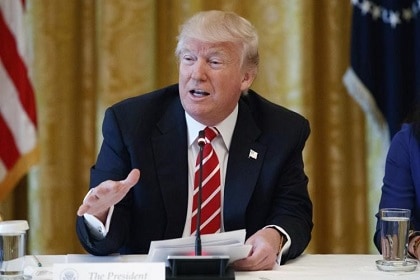 I wanted him to know that there are millions of gun owners in this country — Americans who are members of his base — who do NOT support the infringements that have been proposed by the political left.

The leaders of the anti-gun left couldn’t be happier right now.

They know what they are doing.

House Minority Leader Nancy Pelosi has already stated that “I certainly hope” a ban on bump stocks will lead to further gun restrictions.

They understand that saying “yes” to one infringement will eventually lead to more encroachments upon the liberties protected by the Second Amendment.

And that’s the chief reason why we cannot compromise.

As I sit here at my desk, typing this letter to you, I was reminded of the famous quote from the Rev. Martin Niemöller, a Holocaust survivor:

First, they came for the Socialists, and I did not speak out — because I was not a Socialist.

Then they came for the Jews, and I did not speak out — because I was not a Jew.

Then they came for me — and there was no one left to speak for me.

If we don’t speak up against the infringements of today, it will weaken our ability to oppose the next infringements that come down the pike.

So here’s what I told President Donald Trump:

1) Banning bump stocks by regulation would be illegal and unconstitutional.

Federal statutes make it clear that “machinegun” — which has come to mean “fully automatic firearms” — means: In 18 U.S.C. 921(a) (23) and 26 U.S.C. 5845(b), which it references, a “machinegun” must “shoot, automatically more than one shot, without manual reloading, by a single function of a trigger.”

However, the “bump stock” does not do this.

A “bump stock” allows a trigger to function much more rapidly than would otherwise be the case. But this function of the firearm remains the same! The trigger must function for each round to be discharged.

Thus, under 18 U.S.C. 921 (a) (28), the firearm with the “bump stock” remains a semi-automatic firearm because there is a “separate pull of the trigger to fire each cartridge.”

So there is no statutory authority to ban a “bump stock,” “trigger crank,” or any similar device.

Neither is there any Second Amendment authority, given the “shall not be infringed” language.

2) Proposed legislative language to outlaw bump stocks would also ban detachable magazines — and it is hard to imagine that regulations would not do the same.

Sen. Dianne Feinstein’s bill, S. 1916, makes it illegal to “possess” any firearm accessory which “functions to accelerate the rate of fire of a semiautomatic rifle…” (The Republican bill, H.R. 3999, would do the same.)

Everyone agrees that this language would outlaw lighter trigger pulls, accelerated hammer drops, polished bolts, and any other device used by a competitive shooter to accelerate the rate of fire of his semi-automatic firearm.

But it is equally clear that high-capacity magazines are intended by Feinstein to be covered by her language — and could, in fact, be outlawed, perhaps immediately.

Outlawing magazines has been a long-time goal of Feinstein and the anti-gun Left. And yet, all of the current legislation in Congress right now to ban bump stocks — even the bills introduced by Republicans — would open this door to banning high-capacity magazines.

It is difficult to conceive of how the Trump administration will navigate between this Scylla and Charybdis — regulating bump stocks without also using a definition that can apply to high-capacity magazines.

And the day a Democrat gets elected to the White House, there is a 100% complete-and-total absolute certainty that high-capacity

magazines will be retroactively outlawed by the anti-bump stock language. And they will not be grandfathered.

In fact, with embedded bureaucrats, career Assistant U.S. Attorneys, Clinton and Obama judges, crusading Leftist states’ attorneys general, and Bloomberg-financed lawsuits, we may not have to wait until the end of the Trump administration to see this come to pass.

So what does it mean when the Feinstein language bans a device which could “accelerate the rate of fire”? The obvious conclusion is that, if there is a tenth-of-a-second interval between the discharge of rounds, rather than a half-second, that represents an “acceleration.” And it certainly does.

But what about the ridiculous argument — one can foresee the anti-gun left making — that rather than putting one round at a time into a rifle, a magazine helps “accelerate the rate of fire” of a semi-auto?

Certainly, that argument would endanger all magazines, no matter what the size.

3) Politically speaking, there would be tremendous danger in pursuing Second Amendment infringements, because the intensity factor on gun issues lies with protecting the Second Amendment.

Pursuing an infringement of the Second Amendment — in regard to bump stocks — would place the Trump administration to the left of Obama’s ATF.

One of the major pillars of your support has been the pro-gun community. To compromise here could inflict irreparable damage to your base.

Besides, lawsuits will inevitably follow. And if gun rights supporters have to sue the Trump administration, it is going to seriously change the base going into the 2018 elections.

So here is where your assistance comes in.

I need you to help back up what I’ve said.

Please contact President Trump and let him know that grassroots gun owners OPPOSE any and all Second Amendment infringements.

Can I count on your help?

If so, please send your email immediately and then follow it with a phone call to double your impact.

And please try to include a generous contribution to ensure that new 2A regulations or bans never see the light of day.

P.S. Please urge President Trump to oppose all restrictions and regulations on bump stocks, detachable magazines and other firearm parts or accessories. And please try to include a generous contribution to help GOA stay on the frontlines.